Josh Hawley Net Worth: Josh Hawley is an American politician who has a net worth of $1.1 million. Josh was elected to the US Senate after defeating incumbent Claire McCaskill in 2018. According to his most recent financial disclosure, Josh's net worth ranges between $500,000 and $1.7 million, after removing between $250,000 and $500,000 worth of liabilities.

Early Life: Joshua David Hawley was born on December 31, 1979 in Springdale, Arkansas. His family soon moved to Lexington, Missouri. His mother is a teacher and his father worked in finance and banking.

Between 2002 and 2003 he spent a year teaching at St Paul's School in London before returning to attend Yale Law School. He graduated with his Juris Doctor in 2006.

After graduating, Hawley spent two years working as a law clerk for a U.S. Court of Appeals judge. He then clerked for Supreme Court Chief Justice John Roberts from 2007 to 2008.

Political Career: In 2016 Hawley launched a bid to become Attorney General of Missouri. On August 2, 2016 he was elected in the Republican primary and then went on to win the general election on November 8.

He served as Attorney General from 2017 to 2019. During his time as AG, he joined 20 Republican AGs in opposing the Affordable Care Act. Their lawsuit sought to declare the ACA as unconstitutional and would have eliminated coverage for people with preexisting conditions. On appeal, the lawsuit was eventually shut down.

During his time as AG, Josh investigated opioid manufacturers, tech companies such as Google and Catholic clergy.

In November 2018 Josh was elected to the US Senate, defeating Claire McCaskill.

Trump Riots: In January 2021, Josh announced his intention to object to Electoral College results in several swing states on January 6 when the Senate was meeting to confirm the results. The action was roundly criticized as a pointless act of theater to further Hawley's own political ambitions and appease Donald Trump. The objection had zero chance of actually impacting the election.

As Hawley entered the capital on January 6, he put up a clenched fist and thumbs up salute to Donald Trump's soon-to-be traitorous rioters. Soon after Hawley's salute, those rioters stormed the Capital, clashed with police, broke into private offices, broke into the Senate and House floors and generally wreaked havoc that left one rioter dead.

In the wake of the violence many called for Hawley to be expelled or even arrested His acts in retrospect had the tint of treason and sedition. To make matters worse, Hawley actually put out a fundraising plea while the riots were underway.

Furthermore, AFTER the riots and bodies were cleared from the Capital, Hawley continued with his pointless electoral objection theater.

His hometown paper, the Kansas City Star, soon posted an article titled "Assault on Democracy: Senator Josh Hawley has blood on his hands in Capital coup attempt". The St. Louis Post-Dispatch posted a headline "Hawley sets the constitution on fire and chaos ensues". The Washington Post went with the headline "Trump, Hawley and Cruz will each wear the scarlet "S" of a seditionist".

A day later, publishing company Simon & Schuster announced it had revoked a deal to release a book written by Hawley. Hawley responded to the announcement over Twitter with a post that was overwhelmingly derided. Hawley complained about his First Amendment rights being taken away despite the fact that there is clearly no First Amendment right to release a for-profit book. Furthermore, his Tweet complaining about the book deal was the first Tweet he had sent since the violent riots that he arguably helped cause. He did not send a Tweet denouncing the violent mob or calling for prayers for the people who were injured or lost their lives. One of the people murdered in the riots was a Capital Policeman.

Personal Life: Josh met his future wife Erin Morrow while they both clerked for John Roberts. They married in 2010 and have three children. 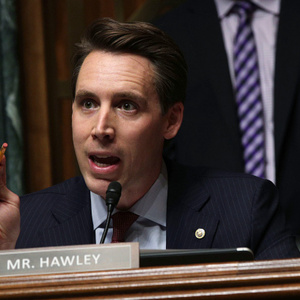