He later earned his international politics degree from the University of Pennsylvania in the late '80s. After graduation, he worked overseas in Taipei before landing a job in the White House as an assistant during Reagan's presidency. He went on to serve as the U.S. Ambassador to Singapore under George H.W. Bush, the youngest ambassador in more than 100 years. During the younger Bush's administration, Huntsman served as a Deputy U.S. Trade Representative. Two years after his appointment, Huntsman resigned and joined the race for governor of Utah on the Republican ticket. He became Governor in November 2004 and was re-elected four years later with more than 77 percent of the vote. Huntsman was an extraordinarily popular governor, earning 90 percent approval ratings more than once during his time in office. During the Obama administration, Huntsman was appointed U.S. Ambassador to China, though he resigned in the spring of 2011 to pursue a potential presidential run. He eventually dropped out of the race in early 2012 with an endorsement for candidate Mitt Romney. During January 2014, Huntsman became chairman of the Atlantic Council. He has seven children, including two who were adopted from other countries, with his wife, Mary Kaye. 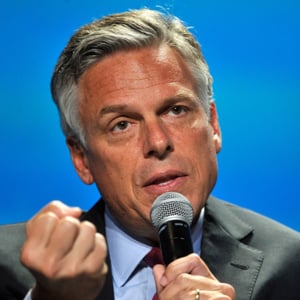