John Kasich net worth: John Kasich is an American politician who has a net worth of $10 million. John Kasich was born in McKees Rocks, Pennsylvania in May 1952. He is the current Governor of Ohio. Kasich is a Republican who graduated from Ohio State University. He first worked as a researcher for the Ohio Legislative Service Commission and then was an administrative assistance to state Senator Buz Lukens.

Kasich served as a member of the Ohio Senate from the 15th district from 1979 to 1982. From 1983 to 2001 he served as a member of the U.S House of Representatives from Ohio's 12th district and from 1995 to 2001 he served as Chairman of the House Budget Committee. Kasich became the 69th Governor of Ohio in 2011. He has worked as a commentator on the Fox News Channel and hosted the television series Heartland with John Kasich from 2001 to 2007. Kasich has also worked in the private sector as an investment banker and a managing director at Lehman Brothers. 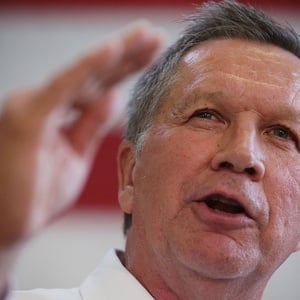