What Is John Boehner's Net worth?

John Boehner was born in Reading, Ohio, on November 17, 1949, the second of 12 children born to Mary Anne and Earl Henry Boehner. He grew up in a two-bedroom house in Cincinnati and shared one bathroom with his 11 siblings. He began working at his family's bar when he was eight. Boehner went to Moeller High School and was a linebacker on his school's football team. He graduated high school in 1968 and enlisted in the Navy, as the country was at the height of the Vietnam War. He was honorably discharged after just eight weeks of service due to a bad back.

He went on to graduate from Xavier University in the late '70s. It took him seven years to complete his college education, as he held several jobs in order to afford the tuition. He earned his B.A. in business administration and was the first person in his family to go to college.

He began working for a packaging and plastics company called Nucite Sales just after graduating. He eventually rose to President of the company, and retired from the position in 1990. He began to shift his focus to a career in politics in the early 80s, beginning as a member of the Board of Trustees in his county, and then serving as an Ohio State Representative from 1985-1990.

Boehner ran against incumbent Congressman Buz Lukens in 1990, who was at the time under fire for his involvement in a sexual relationship with a minor. Boehner won the primary with 49 percent of the vote despite being unknown and dramatically outspent. In the November election, he beat his Democratic Opponent Greg Jolivette. Boehner was re-elected to Congress 12 times by a substantial margin. During his first year, he was a member of the Gang of Seven which brought attention to the House banking scandal and also investigated the Congressional Post Office, which led to the indictment of Dan Rostenkowski. Boehner served as the House Republican Conference Chairman from 1995-1999 and during this time championed the Freedom to Farm Act. He lost his position as conference chairman to J.C. Watts in 1998. After George W. Bush was elected in 2001, Boehner was elected as chairman of the House Education and the Workforce Committee, a role he served from 2001 to 2006. During this time. Boehner and Senator Ted Kennedy authored the No Child Left Behind Act of 2001 which President Bush signed into law in 2002.

During the midterm elections of 2010, Republicans won a majority of seats in the House. Boehner was chosen unanimously in November 2010 as their nominee for speaker of the House. He received the gavel on January 5, 2011, from outgoing Speaker Nancy Pelosi. Boehner was the first Speaker from Ohio since 1931, and the first Speaker to serve as both majority and minority floor leader for the Republicans. He was narrowly re-elected as Speaker of the House in January 2013, receiving 220 votes (with 214 required to win). 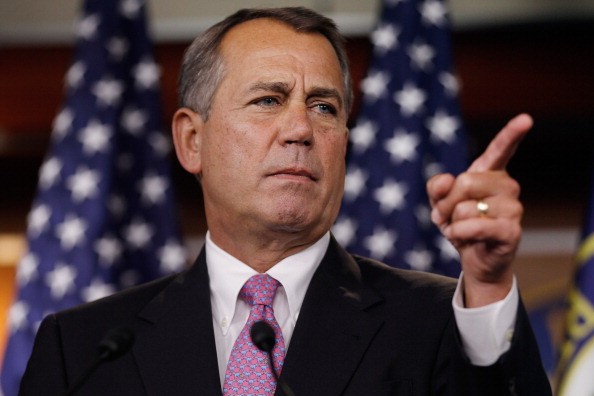 Boehner announced his intent to step down as Speaker on September 25, 2015 and that he would resign from Congress in October 2015. House Majority Leader Kevin McCarthy (R-CA) had intended to run for the Speaker and was seen as the favorite to win, however, McCarthy abruptly stepped down from his candidacy. Boehner stayed on as Speaker until a new successor was chosen. Eventually, Paul Ryan (R-WI) ran for Speaker and won. Boehner presided over Ryan's election in his final act of Speaker on October 29, 2015. His resignation became official at 11:59 p.m. on October 31, 2015.

In April 2016, Boehner made headlines when he referred to Republican presidential candidate Ted Cruz as "Lucifer in the flesh." He joined the board of the tobacco company Reynolds American in September 2016. In 2018, he joined the board of cannabis corporation Acreage Holdings to promote the use of medical cannabis and to advocate for federal de-scheduling of the drug. He was named chair of the National Cannabis Roundtable in 2019.

Boehner supported Donald Trump during his run for the Republican nominee for President in 2016 but in August 2020 a spokesperson for Boehner claimed that he would not endorse either Trump or Joe Biden for the election, stating: "The answer is no. I think he'd rather set himself on fire than get involved in the election. Nothing to see here." Boehner called on Republicans to "awaken" after a mob of Trump supporters stormed the Capitol in a deadly insurrection on January 6, 2021, stating: "The invasion of our Capitol by a mob, incited by lies from some entrusted with power, is a disgrace to all who sacrificed to build our Republic" He later congratulated Joe Biden after it was certified that he had won the 2020 presidential election. During this time, he also was quoted calling Ted Cruz "a reckless asshole that thinks he is smarter than everyone else" and that he felt Trump should resign.

Boehner published his memoir "On the House: A Washington Memoir" in April 2021. It unveils the various reasons behind his resignation, including influence from the Tea Party and the far right group Freedom Caucus, which later morphed into Trumpism. He also further derides Cruz and Trump, along with Sean Hannity, Michele Bachmann, and Rush Limbaugh. However, despite his harsh criticism, Boehner confirmed in the book that he did indeed vote for Trump in 2020.

Boehner has been married to his wife Debbie since 1973. They have never resided in another state but Ohio. They have two daughters, Lindsay and Tricia.