How much is Joe Arpaio Worth?

Joe Arpaio Net Worth and salary: Joe Arpaio is an American sheriff who has a net worth of $500 thousand. Joe Arpaio was born in Springfield, Massachusetts in June 1932. Arpaio is the six-time elected sheriff of Maricopa County, Arizona. He was first voted into office in 1992 and is responsible for law enforcement in Maricopa County which includes the metro Phoenix area. He is in charge of the management of the Maricopa County Sherriff's Office, county jail, prisoner transport, courtroom security, and service of warrants and process. "Sherriff Joe" started taking an outspoken stance as an advocate for immigration law to be strictly enforced in 2005. He became synonymous with Arizona's SB1070 anti-illegal immigration law which was mostly struck down by the U.S. Supreme Court. Arpaio considers himself "America's Toughest Sherriff" and is a controversial figure. Arpaio has been found guilty of racial profiling in federal court. His jails have also been ruled unconstitutional twice. He has had suit filed against him by the U.S. Department of Justice for overseeing the worst pattern of racist profiling in U.S. history as well as unlawful discriminatory police conduct. He is also known for investigating the birth certificate of U.S. President Barack Obama and claiming it was forged. Arpaio served in the United States Army from 1950 to 1954. Joe's annual salary is $100,824. He also earns approximately $65,000 per year in pension income from his time at the DEA. 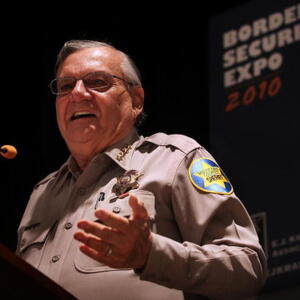