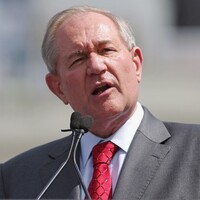 Jim Gilmore net worth: Jim Gilmore is an American politician who has a net worth of $7 million. Jim Gilmore was born in Richmond, Virginia in October 1949. He is best known for being the 68th Governor of Virginia from 1998 to 2002. Gilmore is a Republican who graduated from the University of Virginia. From 1994 to 1997 he served as the 38th Attorney General of Virginia. Gilmore was the 58th Chairperson of the Republican National Committee in 2001. He served as a counterintelligence agent in the United States Army and was elected as a county prosecutor. In July 2015 he announced his candidacy for President of the United States in the 2016 election. Gilmore ran for President in 2008 but was unsuccessful. He is the President and CEO of the Free Congress Foundation and has served as Chairman of the National Council on Readiness & Preparedness. Gilmore is a political commentator for Fox News and is on the Board of Directors for the National Rifle Association.