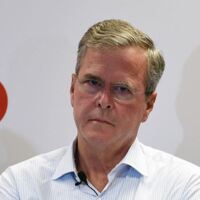 Jeb Bush net worth: Jeb Bush is an American politician who has a net worth of $40 million. Jeb Bush served as the 43rd Governor of Florida from 1999 to 2007. Jeb was the first Republican Governor to serve two full four-year terms in the State of Florida. He was also a presidential candidate in the 2016 election. He is the second son of President George H.W. Bush and the younger brother of former President George W. Bush.

Presidential Campaign: Jeb made an ultimately unsuccessful run for President ahead of the 2016 election. Despite starting out as a front-runner and practically a presumptive winner, he was swiftly and thoroughly defeated by Donald Trump. Donald nicknamed his rival "low energy Jeb".

Early Life: Bush was born on February 11, 1953 in Midland, Texas to parents George and Barbara Bush. His full name is John Ellis Bush but was nicknamed "Jeb" due to his initials. The Bush family had six children in total, with Jeb being the third child after older brother George and older sister Robin. Robin died at the age of 3 from leukemia when Jeb was less than a year old.

At age six, Bush's family moved to the Tanglewood neighborhood of Houston, Texas, where Bush attended Grady Elementary School. Like the other males in his family, he then attended the Phillips Academy, a boarding school in Andover Massachusetts. He had already completed his first year of high school in Houston but was required to repeat the year at the Phillips Academy due to poor grades. However, by his senior year he made the honor role and also served as captain of his high school tennis team. He enrolled at the University of Texas at Austin in September of 1971, rather than attending Yale University like many other members of his family.

Career: After graduating from UT, Bush found work at the Texas Commerce Bank. After three years, the bank sent him to Caracas, Venezuela to open a new branch of the bank. In 1980, Bush moved his family to Miami, Florida where he got involved with real estate investing. He became the partner in The Codina Group, one of South Florida's leading real estate development firms. He was also involved with a number of other entrepreneurial pursuits and also got involved with his father's political campaigns.

Bush got involved in politics in Florida in the mid 1980s when he became the Chairman of the Dade County Republican Party. After helping Bob Martinez win the 1986 governor race, Martinez made Bush Florida's Secretary of Commerce. He served in this role until 1988, when he resigned to work on this father's presidential campaign.

In 1994, Bush unsuccessfully ran for governor of Florida. However, when he ran again in 1998, he won. When he secured the win again in 2002, Bush became Florida's first two-term Republican governor. While serving as governor, Bush focused on reforms to the state education system, promoting school choice by helping establish the state's first charter schools, conservation efforts in the Everglades, and reducing taxes and state spending. He was also in office during the contentious recount of Florida's votes in the 2004 presidential election involving his older brother, George W. Bush. During this time, Bush recused himself from playing any role in the vote recount process. 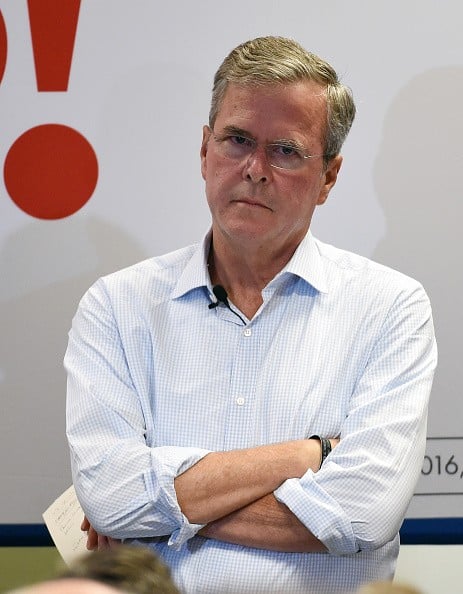 After his run as Florida's governor came to an end, Bush remained involved in Florida politics and also in the national Republican party. He remained particularly active in education, and served as a Board Member for the National Assessment Governing Board from 2004 to 2007, an organization focused on establishing education policy based on K-12 student progress reports.

In December of 2014, Bush announced on Facebook that he was considering running for president in the 2016 U.S. election. He officially announced his candidacy in June of 2015, characterizing himself as a moderate Republican promising immigration reform and other classic conservative policies, such as limits on access to abortion, opposing a federal allowance for same-sex marriage, and fiscal conservatism. However, his candidacy, while promising at first, was relatively short-lived and failed to build a large enough support base. He suspended his campaign following a disappointing result in the South Carolina primary and then then endorsed Texas Senator Ted Cruz. Bush stated after President Trump won the Republican nomination that he would vote for neither Trump or Hillary Clinton in the 2016 Election.

Bush has also been involved in a number of civil and charitable activities over the years. He was the co-chair of his mother's foundation, the Barbara Bush Foundation for Family Literacy, from 2012 to 2015. He also created his own organization, the Foundation for Excellence in Education, which is a think tank on education reform. He also hosts the Annual AT&T Jeb Bush Florida Golf Classic, a fundraiser meant to raise funds for the Cystic Fibrosis Foundation.

Personal Life: Bush met his future wife Columba Garnica Gallo while he was teaching English in 1970 in León, Mexico. They began dating and then were married in Austin, Texas in 1974. They had their first child, George, in 1976. They then had a daughter, Noelle, in 1977, and another son, Jeb Jr., in 1983.

After being raised in an Episcopalian home, Bush decided to convert from that religion to Roman Catholicism in 1995. He subsequently became a Fourth Degree Knight of Columbus, a Catholic fraternal service order, in 2004. He is also a member of the Father Hugon Council in Tallahassee and has joined the Father Hugon Assembly.