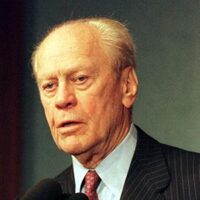 Gerald Ford Net Worth: Gerald Ford was an American politician who had a net worth of $7 million dollars. Gerald Rudolph Ford, Jr. was born Leslie Lynch King, Jr. in Omaha, Nebraska in July 1913. He passed away in December 2006. Ford was the 38th President of the United States, serving from 1974 to 1977. Prior to his presidency, Ford served as the 40th Vice President of the United States from 1973 to 1974 under President Richard Nixon. He became the Vice President after Spiro Agnew resigned, and was the first person appointed to the position under the 25th Amendment. Ford became the only person to serve as President and Vice President without being elected by the Electoral College when he took over after Nixon resigned.

Prior to entering the White House Ford served as Representative from Michigan's 5th congressional district for nearly 25 years, including eight years as the Republican Minority Leader. During his presidency Ford signed the Helsinki Accords during the Cold War. He dealt with a poor economy with inflation and a recession. He made a controversial presidential pardon to Richard Nixon for his role in the Watergate scandal. Ford's term marked an increased role for Congress and Presidential powers being curbed. In 1976 he lost narrowly to Jimmy Carter for reelection. Gerald married Betty Bloomer in 1948 and the couple had four children. He served in the United States Navy from 1942 to 1946 and graduated from the University of Michigan and Yale Law School. Gerald Ford passed away on December 26, 2006 at the age of 93. At his age he lived longer than any other United States president.