Clay Shaw Jr. Net Worth: E. Clay Shaw Jr. was an American politician who had a net worth of $8 million. Born Eugene Clay Shaw, Jr. (April 19, 1939 – September 10, 2013) was a Republican member of the United States House of Representatives in the period from 1981 until 2007. Once he took a law degree in 1966 from Stetson University School of Law, he practiced law and spent some time working as a certified public accountant. In 1968, he acquired the post of an assistant city attorney in Fort Lauderdale, Florida. Later the same year, he became chief city prosecutor from 1968 to 1969, as well as he served an associate municipal judge from 1969 to 1971. Next, he served as the city commissioner from 1971 to 1973, and vice mayor 1973 to 1975. While in the period from 1957 to 1981, Shaw was the mayor of Fort Lauderdale. As a Republican member of the United States House of Representatives, he represented the 22nd District of Florida until he was defeated by Ron Klein in the 2006 midterm election. 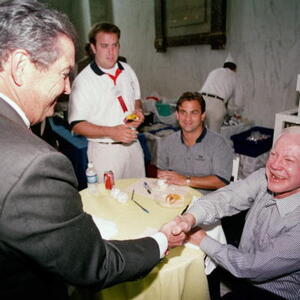