Devin Nunes net worth: Devin Nunes is an American politician and former dairy farmer who has a net worth of $160 thousand. According to his most recent financial disclosure forms, Devin's is worth $160,000. At various times in the past, his net worth has topped $340,000.

Devin Nunes was born in Tulare, California in October 1973. He is a Republican who graduated from California Polytechnic State University, San Luis Obispo with an MS degree. Nunes became a member of the U.S. House of Representatives from California in January 2003. He served as Chair of the House Intelligence Committee from January 2015 to January 2019. Devin Nunes became the Ranking Member of the House Intelligence Committee in January 2019. He served as a member of President Trump's transition team. In 2017 Nunes chaired the U.S. House intelligence committee when it launched an investigation into possible Russian interference in the 2016 United States elections. The U.S. House Committee on Ethics closed their investigation in 2017 without taking any action against him. He released the Nunes memo in 2018 which is a four page memorandum that alleged an FBI conspiracy against Donald Trump.

Frivolous Lawsuits: Devin Nunes has developed a habit of filing frivolous lawsuits against critics. He attempted to sue a Twitter use who operated a parody account called "Devin Nunes' Cow". A judge ruled that no reasonable person could ever think that a cow could actually operate a Twitter account. That account now has nearly as many followers as Devin's actual official account. 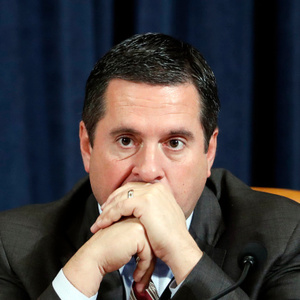