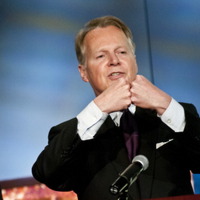 David Dreier Net Worth: David Dreier is an American Republican Party politician and entrepreneur who has a net worth of $7 million. David Dreier was born July 5, 1952 in Kansas City, Missouri. He is best known as a member of the U.S. House of Representatives (1981-2013) and as Chairman of the Rules Committee. Dreier attended the Principia Upper Schools in St. Louis, Missouri and earned a B.A. at Claremont Men's College, Claremont, California, in 1975. He went on to earn an M.A. at Claremont Graduate School in 1976. He was also the Director of Corporate Relations at Claremont McKenna College (1975-1979). He was a delegate for California state in the Republican conventions (1978-1980) and a delegate for the Republican National Conventions (1976-1980). After the 1980 U.S Census, his district was renumbered to the 33rd and he defeated U.S. Congressman Wayne Grisham in the Republican primary of 1982. He won re-election every two years after that with at least 57% of the vote until his 2004 re-election campaign. During the 2004 election, Dreier faced strong criticism on his stances on illegal immigration from opponent Cynthia Matthews. In 2006, he won re-election in the rematch against Matthews. After the 2010 U.S. Census, the voter-created California Citizens Redistricting Commission put Dreier and longtime Republican congressman Jerry Lewis into the newly drawn 31st congressional district. Dreier is a member of the Republican Main Street Partnership and was a leading member of the board of directors of the International Republican Institute. Dreier has been a longstanding supporter of closer ties between the U.S. and countries of Latin America, and has met frequently with executive and legislative branch leaders throughout the region. He formerly lived in Beverly Hills and Malibu with his chief of staff, Brad Smith, with whom he was rumored to be romantically involved for several years. He currently resides in San Dimas, California.