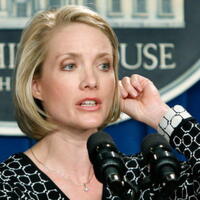 What is Dana Perino's net worth and salary?

Dana Perino is an American political commentator who has a net worth of $6 million dollars. She first gained notoriety for her role as the 26th White House Press Secretary, serving under President George W. Bush. Perino was only the second woman to serve as White House Press Secretary, behind Dee Dee Myers during the Clinton years. She is also the Editorial Director for Crown Forum, the conservative publishing arm of Crown Publishing Group.

Dana Perino was born on May 8, 1972 in Evanston, Wyoming. Perino grew up in Denver, Colorado attending Ponderosa High School in Parker (a suburb of Denver,) and graduated from Colorado State University-Pueblo in the mid-90s with a degree in Mass Communications. While in college she worked for various college stations, producing and hosting programs on politics and public affairs. She was also on the school's forensics (competitive speech and debate) team and she worked at her campus-based Rocky Mountain PBS affiliate, KTSC-TV. She went on to earn her Master's Degree in Public Affairs Reporting from the University of Illinois at Springfield. While getting her Master's degree,

After relocating to Washington, D.C., she served as a staff assistant for Rep. Scott McInnis. This led to work as the press secretary for Rep. Dan Schaefer, a role she was in for almost four years. She moved with her husband Peter McMahon to England in 1998 and returned to Washington in November 2001, two months after the September 11 attacks. From there, she went on to become the spokesperson for the Department of Justice in 2001. Perino then worked as the Associate Director of Communications for the White House Council on Environmental Quality.

She eventually rose to the position of Deputy Press Secretary under George W. Bush. While Tony Snow underwent cancer treatment in 2007, Perino served as the Acting White House Press Secretary. She took over full Press Secretary duties from 2007-2008. During a Bagdahd press conference in December 2008, a TV journalist named Munstadhar al-Zaidi threw two shoes at President Bush, and Perino's eye was injured by a microphone stand during the kerfuffle. Perino held the title of Assistant to the President and as White House Press Secretary from September to January 2009, when the Bush administration came to a close and President Obama took over. 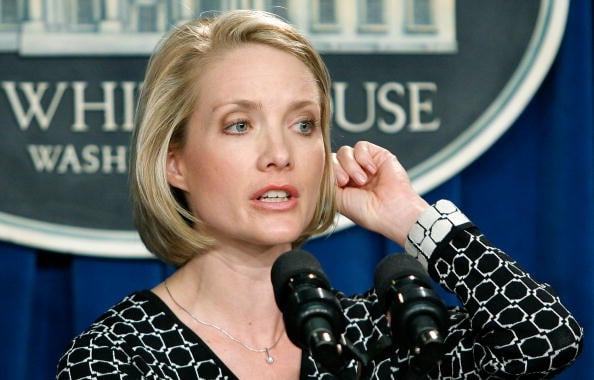 Perino became a political commentator for Fox News after she left the white house. She began co-hosting the talk show "The Five" in 2009. Later that year, she was nominated by President Obama to serve on the Broadcasting Board of Governor's agency. She was confirmed by the Senate in June 2010. She also began teaching political communications at George Washington University's Graduate School of Political Management. She joined the Crown Publishing Group of Random House as a book editorial director / publishing executive but left that position after a few years. She started a podcast in September 2016 called "Perino & Stirewalt: I"ll Tell You What," co-hosted with Chris Stirewalt. The show was a weekly series until Stirewalt was fired from Fox News after the 2020 presidential election. In October 2017, Perino hosted "The Daily Briefing with Dana Perino" on Fox News. She left in early 2021 to begin a co-anchor position on "America's Newsroom" alongside Bill Hemmer.

Outside of her successful political and media career, Dana has written three books: "And the Good News Is…Lessons and Advice from the Bright side" in 2015, "Let Me Tell You About Jasper…How My Best Friend Became America's Dog," in 2016, and 2021's "Everything Will Be Okay: Life Lessons for Young Women (from a Former Young Woman."

She met Britain-born Peter McMahon on a flight to Denver in August 1997 and the pair eloped in England 11 months later. Although they briefly resided in the United Kingdom, they have been long-time residents of Bay Head, New Jersey. Perino also gained some notoriety for her pet dog Jasper, a Vizsla who unfortunately passed away in September 2021. She announced on Fox that she and her husband had adopted another Vizsla a few months later.