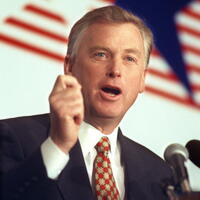 What is Dan Quayle's Net worth?

Dan Quayle is an American politician who has a net worth of $6 million. In 1988, Quayle estimated his net worth to be $1.8 million. That's the same as around $3 million today. His net worth was primarily derived from real estate and a financial trust set up before he became Vice President. Quayle is best known for serving as the 44th Vice President of the United States under President George H.W. Bush from January 1989 to January 1993. He practiced law after college and as Vice President he served as chairman of the National Space Council. His memoir Standing Firm was published in 1994.

Dan Quayle was born in Indianapolis, Indiana in February 1947, the son of Martha Corinne and James Cline Quayle. The family's last name originates from his great-grandfather, who hailed from the Isle of Man. Quayle's grandfather on his mother's side was the influential publishing magnate Eugene C. Pulliam. He founded and owned over a dozen major newspapers.

Dan grew mostly up in Arizona but returned to Huntington, Indiana to attend Huntington North High School where he graduated in 1965. He is a Republican who graduated from DePauw University with a B.A. in Political Science in 1969 and earned his J.D. from Indiana University School of Law – Indianapolis. He played on the golf team in college and was a member of Delta Kappa Epsilon.

George H.W. Bush chose Dan Quayle to be his running mate for the 1988 U.S. Presidential Election on August 16, 1988. At the convention that year, the press hounded Quayle on his military service, a golf vacation in Florida, and his lack of experience. Quayle appeared visibly shaken and evasive while responding to the questions. At the vice-presidential debate in October 1988, Quayle debated the Democratic candidate, Lloyd Bentsen, who was Michael Dukakis's running mate. Bush and Quayle won 53-46 and swept 40 states. They captured 426 electoral votes. Quayle was sworn in as Vice President of the United States on January 20, 1989. He visited over 47 countries during his time as Vice President

Four years later, Bush and Quayle ran again, up against Bill Clinton and Al Gore as the Democratic challengers and the independent ticket Ross Perot and James Stockdale. During this campaign, Quayle reported to the media that he believed not only that homosexuality was a choice, but was quoted as saying it was "the wrong choice." Bush lagged in polls in the weeks leading up to the 1992 Republican National Convention, with many right-wing strategists viewing Quayle as a liability. They pushed for his replacement but he ultimately was kept on the ballot. Bush and Quayle went on to lose their bid for reelection to Clinton and Gore, 168 votes to the opposition's 370. 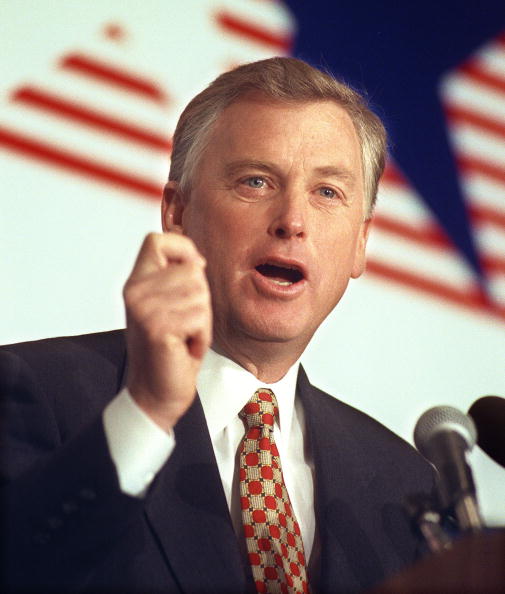 After the Vice Presidency

Quayle became the trustee of the Hudson Institute in 1993 and from January 1993-1999, he served on the board of Central Newspapers, Inc. He headed the Campaign America political action committee from 1995-1999. He wrote a memoir, Standing Firm which became a bestseller in 1994. He published his second book, The American Family: Discovering the Values That Make Us Stronger, in 1996. His third book Worth Fighting For was published in 1999. He was named a visiting professor of international studies in 1997 at the Thunderbird School of Global Management.

Quayle unsuccessfully threw his name in the race for the 2000 presidency, which he announced in 1999 on a January appearance of Larry King Live. He withdrew from the race in August 1999 after finishing eight in the Ames Straw Poll. He subsequently supported George W. Bush in his race against Al Gore. He joined Cerberus Capital Management in 1999. In 2016, he endorsed Donald Trump for president. He is an Honorary Trustee Emeritus of the Hudson Institute and he serves as president of Quayle and Associates. Quayle is also a director of the Tokyo-based Aozora Bank. In the book Perl by Bob Woodward and Robert Costa, it's revealed that Quayle played a key role in advising VP Mike Pence to follow the Senate rules and certify the results of the 2020 presidential election. He went on to attend the inauguration of President Joe Biden in January 2021.

Dan met Marilyn Tucker while they were attending law school and had been assigned to work together. They were married just a few weeks later on November 18, 1972. Marilyn Quayle gave birth to their first child just a few days before the bar exam, which they both passed in 1974. They have three children: Corrine, Benjamin, and Tucker. The Quayles live in Paradise Valley, Arizona.