Chris Christie net worth and salary: Chris Christie is an American politician who has a net worth of $4 million. He is the former Governor of New Jersey, serving from 2010 to 2018. He is also a one time candidate for President of the United States.

Early Years: Christopher James Christie was born Sept. 6, 1962 in Newark, New Jersey to Wilbur James "Bill" Christie, a certified public accountant, and Sondra (Grasso) Christie, a telephone receptionist. His father was a Republican and his mother was a Democrat.

The family relocated to Livingston, New Jersey shortly after the 1967 Newark race riots, where they remained through Christie's formative years, and it is there that his interest in public service began.

Christie's path to politics emerged while he attended Livingston High School. In addition to playing catcher for the baseball team, he was elected class president, and was selected as a representative for the United States Senate Youth Program.

After graduating high school, he went on to complete his undergraduate degree in political science at the University of Delaware, then earned his Juris Doctor at Seton Hall University.

After law school, Christie began working for a private law firm Dughi, Hewit, and Palatucci, where he specialized in securities law, election law, and government affairs; and he eventually became a partner.

During this time, Christie volunteered for George H.W. Bush's re-election campaign, and bonded with fellow attorney William Palatucci, who worked for President Bush. Soon after, Christie would seek elected office.

Governorship: In 1994, Christie was elected to the board of Chosen Freeholders. Christie ran as a Republican and beat the incumbent legislator in Morris County, New Jersey, and it was there that he cut his political teeth.

The following year he ran for a seat in the New Jersey General Assembly but lost. Afterward, he went back into private practice for several years. Christie worked as George W. Bush's campaign lawyer during the 2000 presidential election, and was also a successful fundraiser for the campaign.

Christie had the opportunity to stretch both his legal and political wings, in 2001 when President Bush appointed Christie to the post of U. S. Attorney for the District of New Jersey. During his tenure as the U.S. Attorney, he proved to be popular amongst local Republicans, and exercised his fundraising talents for the Republican party. He remained in the position for six years.

Christie's political aspirations continued to grow, and in 2009 Christie ran for, and was elected as Governor of New Jersey; he won by just four percent of the vote, defeating Democratic incumbent Jon Corzine. Governor Christie was re-elected in 2013 and won easily. While he was praised for his recovery work surrounding the aftermath of Hurricane Sandy, and his moderate politics appealed to a wide swath of New Jerseyans, his administration was not without controversy.

Bridgegate: The Fort Lee lane closure scandal, otherwise known as "Bridgegate" thrust Christie into national news; and it would not be the only time he made national headlines for a scandal.

In September 2013, two of three lanes leading to the George Washington Bridge, (a major commuter bridge in Fort Lee, New Jersey that links New Jersey to New York), were shut down before morning rush hour. The shutdown caused massive gridlock and lasted for four days before the New York Port Authority re-opened them.

There was speculation that the lanes were closed intentionally by the state, as a retaliatory action against the mayor of Fort Lee for not endorsing Governor Christie in his most recent election; and because the bridge uses a significant amount of federal funding in its operation, a federal investigation was launched.

The investigation revealed that aides to Governor Christie were responsible for the shutdown of the lanes, and while they claimed at the time of the shutdown that it was for a traffic study, it was discovered there was no study, and that the closings were politically motivated. Three people in Christie's administration were indicted on multiple charges, but the convictions were ultimately overturned. Though Christie was never brought up on charges, there was substantial testimony alleging that he was either behind the scandal or had knowledge of it at the time it was conducted.

Beach Scandal: The State of New Jersey experienced a shutdown of state government in July 2017 due to budgetary issues. As a result of the shutdown, Governor Christie closed state-run beaches to the public, as well as other state-funded services.

On the weekend just prior to the July 4th holiday (which fell on a Tuesday that year), Governor Christie and his family were spotted by a news plane vacationing at the Island Beach State Park, a state-run beach that he had closed to the public. In addition to using the beach, he also used a state helicopter to travel to the site, and his family stayed at the official governor's residence in the park.

Aerial photos of Governor Christie and his family lounging beachside sparked outrage from the public who were living with fallout from the government shutdown, while he privately used public beaches and state-funded lodging and transportation for his private vacation.

"That's the way it goes," said Christie in response to the public outcry. "Run for governor, and you can have the residence."

His glib response was not well-received.

Christie would run as a Republican presidential candidate alongside 16 other major candidates. With such a crowded field, it was difficult for Christie to garner substantial support, and his showing in both the Iowa caucuses and New Hampshire primaries was poor.

With early polls indicating Christie well out of lead for the Republican nomination, he suspended his presidential campaign in February 2016, and backed Donald Trump, who would become the Republican presidential nominee, and eventually President of the United States.

Personal Life: Chris married Mary Pat Foster in 1986, she was a fellow student at the University of Delaware. They have four children. Chris and his family live in Mendham Township, New Jersey. They paid $775,000 for their 6-acre property in 1998. 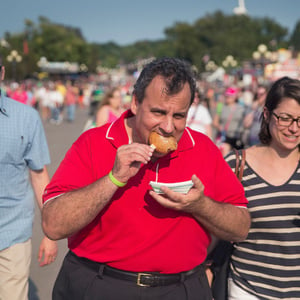