Charlie Crist Net Worth and salary: Charlie Crist is an American attorney and politician who served as the 44th Governor of Florida from 2007 to 2011 who has a net worth of $2 million dollars. Charlie Crist was born on July 24, 1956 in Altoona, Pennsylvania and his family moved to St. Petersburg, Florida, as a child, where he attended Riviera Middle School and is a member of the St.

Petersburg High School class of 1974. He earned his undergraduate degree from Florida State University where he was elected Vice President of the student body and was a member of the Pi Kappa Alpha fraternity. He received his J.D. from Samford University Cumberland School of Law. Crist began his political career as a Republican, serving in the Florida Senate from 1993 to 1999, running unsuccessfully for the U.S. Senate in 1998 and then serving as Florida Education Commissioner from 2001 to 2003 and Florida Attorney General from 2003 to 2007 before being elected Governor in 2006. Crist declined to run for re-election as Governor in 2010, instead announcing on May 12, 2009, that he was running for the U.S. Senate seat being vacated. He lost that election. Crist's term as Governor ended in January 2011. On December 7, 2012, he joined the Democratic Party, having endorsed President Barack Obama for re-election in 2012. On November 1, 2013, he announced that he was running for governor in the 2014 election. 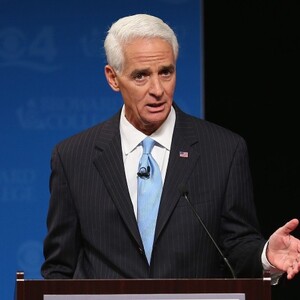