What was Bob Dole's net worth?

Bob Dole was an American politician who had a net worth of $40 million at the time of his death in 2021. That was a combined net worth with his widow, Elizabeth Dole. Bob Dole died on December 5, 2021 at the age of 98. Bob Dole was a Republican politician and attorney who served as a US Senator from Kansas from 1969 to 1996. He subsequently secured the Republican presidential nomination, losing to the incumbent Bill Clinton in the general election. After retiring from public office, Dole appeared on television and served on a number of councils. 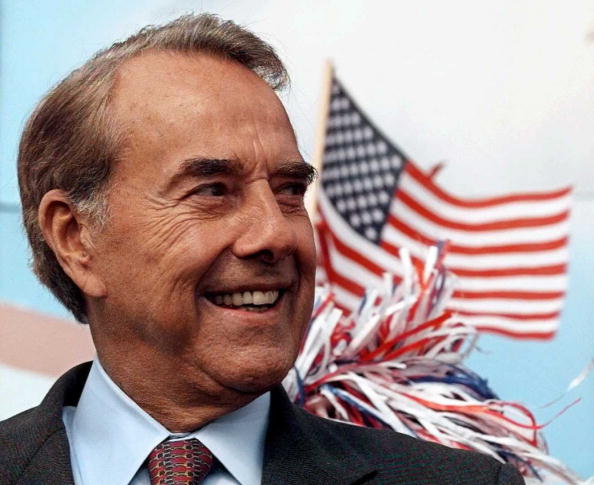 Bob Dole was born on July 22, 1923 in Russell, Kansas to Doran and Bina. As an adolescent, he went to Russell High School, from which he graduated in 1941. He went on to attend the University of Kansas, where he played basketball and football and participated in track. Dole's studies were interrupted by World War II and his enlistment in the US Army. Upon his return, he attended the University of Arizona and then Washburn University in Topeka, Kansas. Dole graduated from the latter with both his undergraduate and law degrees.

In 1942, Dole joined the US Army's Enlisted Reserve Corps as a second lieutenant in the 10th Mountain Division. While engaged in combat in Italy in 1945, he was severely wounded by a German shell that shattered his collarbone and part of his spine. Paralyzed from the neck down, he was transported to a military hospital where he was expected to die. However, Dole survived in part due to the experimental drug streptomycin, and went on to recover at the Percy Jones Army Hospital in Battle Creek, Michigan. He earned two Purple Hearts for his injuries and was medically discharged as a captain in 1947.

Dole ran for public office for the first time in 1950; he was ultimately elected to the Kansas House of Representatives. Following his two-year term, he became the County Attorney of Russell County. Later, in 1960, Dole was elected to the US House of Representatives, representing Kansas's 6th congressional district. He served in the House until 1969.

In 1968, Dole won election to the US Senate, succeeding retiring Senator from Kansas Frank Carlson. He went on to be reelected four times, serving in the Senate until 1996. As a Senator, Dole served as chairman of the Republican National Committee from 1971 to 1973. From 1981 to 1985, he was chairman of the Finance Committee, and from 1985 to 1987 and 1995 to 1996 was the Senate Majority Leader. Dole also made major contributions to the Agriculture Committee.

Dole first became involved in presidential politics in 1976 when he became the running mate of incumbent president Gerald Ford, whose vice president Nelson Rockefeller had recently retired. Ultimately, Ford and Dole lost the election to Jimmy Carter and Walter Mondale. For the 1980 presidential election, Dole ran for the Republican nomination but lost to Ronald Reagan. He ran for the nomination again in 1988, losing to George H. W. Bush.

Dole finally secured the Republican presidential nomination on his third try, in 1996. His running mate was former US Representative and professional football player Jack Kemp. Dole ultimately struggled during his campaign to connect with the American people, and his relatively advanced age of 73 made him appear frail in comparison to the incumbent Bill Clinton. In the general election, Clinton won a second term in a landslide victory.

Following his presidential loss, Dole retired from politics. He went on to have a prolific career dong public speaking, writing, consulting, and television appearances. Notably, Dole served as a commercial spokesperson for numerous brands, including Viagra, Pepsi-Cola, and Dunkin' Donuts. He also joined various organizations over the years, including Verner, Liipfert, Bernhard, McPherson and Hand; the American Society of Anesthesiologists; and Alston & Bird. From 1998 to 2002, Dole served as the head of the Federal City Council in Washington, DC.

Among his other endeavors, Dole did a great deal of volunteer work. He was national chairman of the World War II Memorial Campaign, created the McGovern-Dole International Food for Education and Child Nutrition Program, and co-founded the Bipartisan Policy Center. Dole also penned a number of books, including his autobiography "One Soldier's Story: A Memoir."

Dole wed his first wife, occupational therapist Phyllis Holden, in 1948. The couple had a daughter named Robin, and eventually divorced in early 1972. Dole went on to date attorney and politician Elizabeth Halford, whom he married in late 1975.

Dole struggled with his health for many decades. In 1991, he successfully underwent surgery for prostate cancer. A decade later, he received treatment for an abdominal aortic aneurysm. In 2004, Dole had a hip replacement and suffered a hemorrhage due to the blood thinners he was using. Later in the decade, he was hospitalized for an elevated heart rate and sore legs, requiring a skin graft procedure. Dole was hospitalized again in early 2010 for pneumonia, and in 2017 for low blood pressure. In early 2021, he announced that he had been diagnosed with lung cancer. Dole passed away from the disease at the end of the year, at the age of 98.