She was born in New York on June 8 1925. She attended Smith College, a private women's school in Massachusetts, before leaving to marry her long-time boyfriend, George Herbert Walker Bush, in 1945. Barbara Bush served as the nation's First Lady from 1989 to 1993 and as the Second Lady during Ronald Reagan's presidencies during the 1980s. Barbara became the First Mother of the United States when her son George W. Bush was President from 2001 – 2009. During her husband's first presidential campaign in 1980, she drew attention for her pro-choice stance on abortion, and continued to challenge the Republican Party's views on women's issues throughout her time in Washington. As Second Lady, Bush first began her fight against illiteracy in America when her son was diagnosed with dyslexia. Family literacy would become her cause as First Lady. Her reading and writing efforts earned her the 1995 Award for Greatest Public Service Benefiting the Disadvantaged and the 1997 Miss America Woman of Achievement Award. As part of her campaign, Bush authored a children's book starring her famous English springer spaniel, Millie. She lived her post-political life with her husband at their home in Houston, Texas. She continued to fight illiteracy in the United States up to her death. Barbara Bush died on April 17, 2018 at the age of 92. 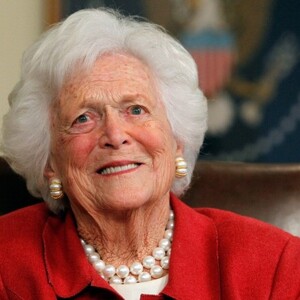