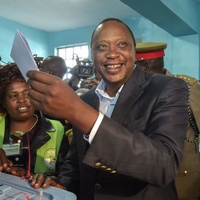 Uhuru Kenyatta Net Worth: Uhuru Kenyatta is the fourth president of Kenya who has a net worth of $500 million. Democratically elected on March of 2013, he has been in office since 9 April 2013. Uhuru, whose name means freedom, was born on October 26, 1961 to the founding father and the first president of Kenya, JomoKenyata. He fulfilled his early education at the Roman Catholic Saint Mary´s School in Nairobi and moved to the United States to complete his Bachelor's degree in politics and economics. Before becoming Kenya's president, Uhuru served as Minister of Local Government from 2001 through 2002 and then he switched to leading the opposition from 2002 through 2007. His political life started in 1997 when he was designated chairman of his hometown´s wing of the ruling party, KANU (Kenyan African National Union). Since then, he was favored in politics escalating positions in the subsequent governments until he reached presidency. The International Court of Crimes charged Kenyatta with crimes against humanity during the violent elections in 2007 that saw MwaiKibaki rise as a victor. Despite these charges, Uhuru was elected president defeating his opponent from the Orange Democratic Movement, RailaOdinga. Considered a man of the people due to his sociability, after being elected, he made a commitment of helping Kenyan people's economy through a program called Vision 2030, unify Kenyans, and free maternal care; the latter he announced to have achieved on June 1, 2013. During a poll regarding his first year in office, he received a negative criticism based on the unhappiness of more than half of Kenyan´s to his administration. Aside from his public service, he is married to Margareth Kenyatta and is the father of three kids, Jomo, Jaba, and Ngina.