What is Sonia Gandhi's Net Worth?

Sonia Gandhi is an Italian-born Indian politician who has a net worth of $3 million. Sonia was married to the late Rajiv Gandhi, India's 6th Prime Minister until his assassination in 1991. They met while they were both students in Cambridge, England and married three years later. They couple eventually had two children. Their son Rahul was born in 1970 and their daughter Priyanka Gandhi was born in 1972. Their family entered the spotlight after Rajiv's mother was assassinated and he was subsequently elected as Prime Minister. Rajiv served as Prime Minister from 1984 until 1989. After her husband's assassination in 1991, Sonia refused to take his place as Prime Minister. She became President of the Indian National Party in 1998. She became Chairperson of the United Progressive Alliance in the Lok Sabha in 2004. She is the longest serving Congressional President of the past 125 years. She is considered one of the most powerful and influential women in the world.

Is Sonia Gandhi a billionaire?

There has been much debate over the years about Sonia's personal wealth. In a 2014 wealth declaration, Sonia estimated her net worth to be between $1 and $3 million. Contrarily, some sources including OpenSecrets.org and Business Insider have estimated that Sonia's actual wealth could be as high as $2 billion. That's the equivalent to Rs 10,000-95,000 crore. According to an expose in a 2012 Swiss magazine, before Sonia's husband Rajiv was assassinated he had stashed away roughly $2 billion in numbered Swiss bank accounts. This claim is not verified as of this writing.

Sonia Gandhi (born Maino) was born on December 9, 1946 to Stefano and Paola Maino in Lusiana in Veneto, Italy. She was raised with her siblings, Nadia and Anoushka in a traditional Roman Catholic home. She grew up in a town near Turin called Orbassano where her father established a small construction business. Her father was a loyal supporter of Benito Mussolini and Italy's National Fascist Party.

Sonia was described by her middle and high school teachers as an intelligent and diligent student. When she was 18, she went to England in order to study English at the Bell Educational Trust's language school in the city of Cambridge. It was there she met future husband, Rajiv Gandhi.

Following her mother-in-law's assassination in October 1984, Sonia became more prominent in Indian politics, especially once her husband, Rajiv, became prime minister. In her capacity as the prime minister's wife, Sonia officially hosted many prominent guests to India and also accompanied her husband on important diplomatic trips. During this time, she became familiar with Indian politics and foreign affairs.

When her husband was assassinated in 1991, many wished for Sonia to succeed him as the president of the Indian National Congress, one of Indian's prominent political parties. She declined to do so. However, as the Congress lost popularity over the next few years, it began to split into multiple factions. In an effort to revive the party's fortunes, she joined the Congress party as a primary member in 1997 and then became party leader in 1998.

A year later, she was challenged by other senior members of the party on her right to lead the party and possibly become India's Prime Minister due to her foreign origins. She offered to resign from the party but a huge outpouring of public support for her instead resulted in the ousting of the senior members. Sonia became president of the party soon after.

In 1999, she was elected the Leader of the Opposition. She remained in this role throughout the BJP-led NDA government that was under the leadership of Atal Bihari Vajpayee. She called a no-confidence motion against the government in 2003. 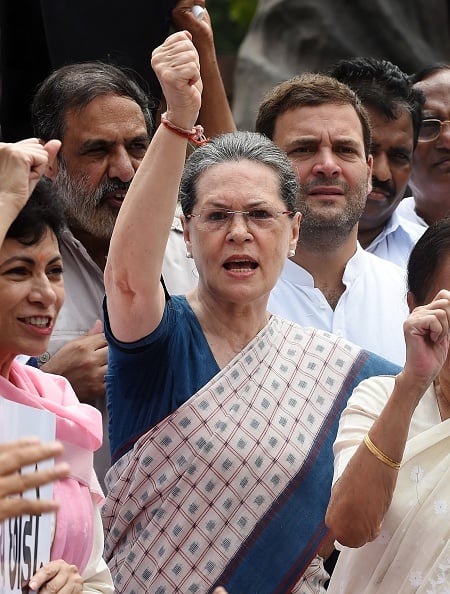 The following year, in 2004, Sonia began a nationwide campaign against the BJP-led NDA party and in May she was unanimously chosen to lead the 15-party coalition government, which became known as the United Progressive Alliance. Many assumed she woud become the prime minister but she ultimately did not. Again, claims surfaced against Sonia that her foreign origin prevented her from holding leadership positions like that of the prime minister, though Sonia did not want the position and instead recommended Manmohan Singh for the position.

Over the next five years, the party did well in India and Sonia remained a very popular figure. In 2009, the Congress-led UPA party won another victory and Manmohan Singh remained the prime minister. Sonia also was re-elected to parliament. By 2013, Sonia had become the first person to serve as Congress president for 15 consecutive years.

However, the next year the party suffered its worst election performance in awhile. A few years later, Sonia's son, Rahul, took over as the president of the Congress in 2017. Sonia did not remain completely out of politics though an by 2018, she resumed campaigning for the candidates and parties she supported. Rahul also resigned from his post as president in May of 2019. Following his resignation, the Congress Working Committee began looking for a suitable replacement and appointed Sonia to take over as interim president until consensus could be reached on a new candidate.

Sonia's life in India has garnered substantial attention on the world stage. She was consistently recognized as one of the most powerful people in the world and certainly was seen as the most powerful politician from India from 2004 until 2014. In 2013, she was ranked the 9th most powerful woman in "Forbes Magazine." She also has been listed in the "Time 100 most Influential People" on numerous occasions.

While living in Cambridge, Sonia was working as a part-time waitress while studying English. She met Rajiv Gandhi, the son of Indian Prime Minister, Indira Gandhi, one day while she was working. He was studying engineering at the time at Trinity College at the University of Cambridge. They began dating and married in 1968 in a Hindu ceremony. Sonia then moved into the family's home in India.

The couple had their first child in 1970 named Rahul. They then had a daughter, Priyanka, in 1972. For most of her life, Sonia was not interested in getting involved in politics and instead spent most of her time at home taking care of her family. She also grew very close to her mother-in-law, Indira Gandhi.

Sonia was diagnosed with cervical cancer in 2011 and underwent surgery in the United States and has since recovered.

Sonia's life has been described in several different books. Rani Singh wrote a biography about her in 2011 and a few other biographies followed. 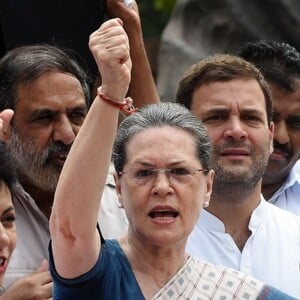