In the 2014 presidential election, he ran as the candidate of the left-wing Farabundo Martí National Liberation Front (FMLN). His prior political standings were such positions as being elected as a deputy for the FMLN in the Legislative Assembly (2002) and re-elected in 2003 and 2006; between 2001 and 2004 he served as the general coordinator of his party; in 2006, following the death of Salvadoran Communist Party leader and FMLN Commander Schafik Handal, he succeeded Handal as head of the legislative portion of the FMLN. In April 2007 he was chosen as the running mate of Mauricio Funes in the 2009 presidential election. Funes and Sánchez Cerén defeated the Nationalist Republican Alliance (ARENA). His political ideology is rooted in various democratic and revolutionary organizations to which he holds membership. Cerén was a member of the PRAM (Partido Revolicionario Abril y Mayo), a political party that was against the dictatorship and advocated anti-imperialism. He then joined (UDN) Union Democratica Nacionalista and PAR (Partido Accion Renovadora). He was also a participant of the (UNO) Union Nacional Oppositora as member of the UDN. He was an active member of the ANDES 21 de Junio, a teachers union that practiced and believed in the ideas of Paulo Freire and his analysis on teaching. In the '70s he joined the Fuerzas Populares de Liberación "Farabundo Martí" (FPL), one of the five left-wing organizations, all of differing Marxist-Leninist tendencies, that later merged to form the Frente Farabundo Martí para la Liberación Nacional (FMLN). 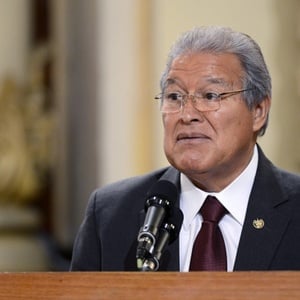