What was Saddam Hussein's Net Worth?

Saddam Hussein was an Iraqi politician who served as the fifth President of Iraq (1979-2003). At the time of his death, Hussein had a net worth of $2 billion dollars.

Saddam formally rose to power in 1979, although he had been the de facto head of Iraq for several years prior. He suppressed several movements, particularly Shi'a and Kurdish movements seeking to overthrow the government or gain independence, and maintained power during the Iran–Iraq War and the Gulf War. Whereas some venerated Saddam for his opposition to Israel—which included the use of military force —he was widely condemned in the west for the brutality of his dictatorship. In the spring of 2003, a coalition of foreign nations invaded Iraq and deposed him. He was subsequently tried and executed for crimes against the Shi'ite people in 2006.

At some point immediately prior to the American invasion of Iraq, over $1 billion in cash was removed from the Central Bank of Iraq in a single evening by a half dozen military trucks. For decades Saddam had been selling oil on the black marker, because Iraq was sanctioned, to countries like Turkey and Syria for cash. It would later be revealed that Saddam's son Qusay ordered the removal of the cash which consisted of $900 million in USD and $100 million in Euros. Most of the money was eventually discovered in one of Saddam's palaces. After securing the palace, American troops were shocked to discover hundreds of aluminum boxes, each stuffed with around $4 million in cash. The money was confiscated and trucked back to a bank setup controlled by the US military.

Around the same time, roughly $650 million in USD was found behind a false wall at the former palace of Saddam's other son Uday. Military investigators initially assumed this stash was part of the $1 billion taken from the Central Bank. It turned out to be a totally separate stash!

American forces concluded it was within their rights to hoard the looted money and use it as they saw fit. Some of the money was spent on legitimate war needs, but some was stolen by US soldiers. For example, the FBI would eventually charge an American soldier who made around 91 bank deposits totaling $440,000 into a bank in Yuma, Arizona. He was a marine in charge of counting money in Fallujah. A different soldier stole around $700,000. He was caught when he bought a BMW and a hummer basically right when he got home. Approximately 35 US soldiers were charged with stealing Saddam's cash.

In the days before Baghdad fell thousands of electronic wire transfers sent billions in funds away from Iraq and into foreign accounts, primarily in Switzerland. Some of that was sent by regular wealthy people of Iraq, but it is estimated that perhaps as much as $5 – $10 billion was transferred by Saddam's family members to accounts they would control. Many of these transfers were overseen by Saddam's half-brother Barzan Ibrahim al-Tikriti. Barzan was the Iraqi ambassador to the United Nations for a decade. During that time he was based in Geneva, Switzerland. 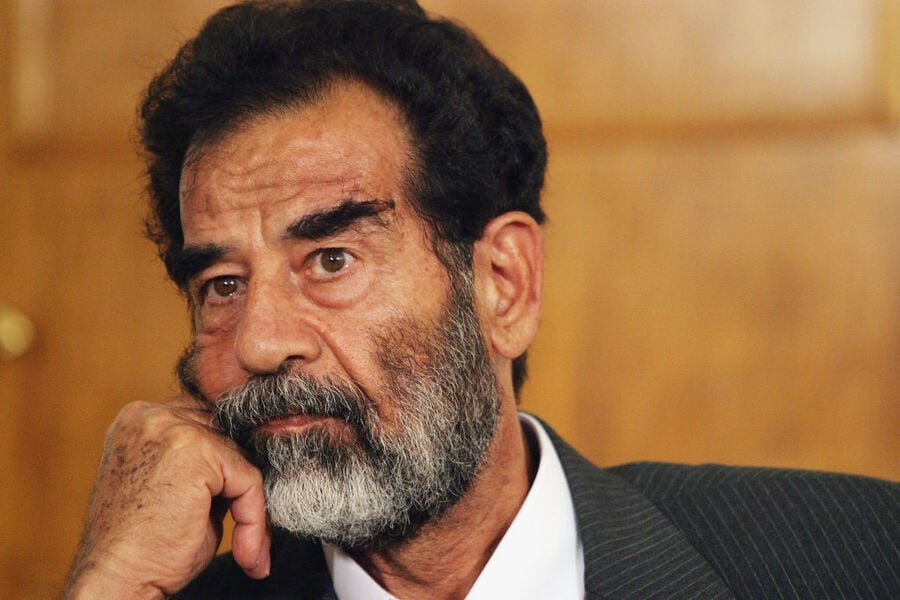 Saddam Hussein was born Saddam Hussein Abd al-Majid al-Tikriti on April 28, 1937, in Al-Awja, Saladin Governorate, Kingdom of Iraq. Before Saddam's birth, his father and brother both passed away from cancer, and overcome with grief, his mother, Subha Tulfah al-Mussallat, tried to abort the pregnancy and attempted suicide. After Hussein's birth, Subha sent him to live with his uncle, Khairallah Talfah, in Baghdad. Subha later married Ibrahim al-Hassan and had three more children; Saddam lived with them for a period but at 10 years old, he fled due to his stepfather's abuse. He returned to the home of his uncle, a Sunni Muslim and Anglo-Iraqi War veteran who became Baghdad's mayor during Hussein's reign. In Baghdad, Saddam studied at a nationalistic high school and later spent three years in law school, but he dropped out at age 20, joining the pan-Arab Ba'ath Party in 1957. Two years later, the party tried to assassinate Abd al-Karim Qasim, the president of Iraq, and though many of the individuals involved were caught and executed, Hussein escaped to Syria. He later fled to Egypt and resumed his law studies.

Saddam returned to Iraq in 1963, and he spent two years in prison after being arrested for plotting against the Iraq government in 1964. In 1966, he escaped from prison and was appointed Deputy Secretary of the Regional Command by Ahmed Hassan al-Bakr, who became Iraq's president after a coup by the Ba'ath Party. He made Hussein his deputy, and Saddam worked on modernizing the country's infrastructure and health-care system, improving education, farming subsidies, and social services, and nationalizing the oil industry. He also helped develop a chemical weapons program. In 1979, al-Bakr tried to unite Syria and Iraq, and Hussein forced him to resign, becoming Iraq's president on July 16, 1979. One of his Saddam's first acts as president was calling a meeting of Ba'ath Party members in which 68 of their names were read aloud; these 68 people were immediately arrested and later tried for treason. All 68 individuals were found guilty, and 22 of them received a death sentence.

In 1980, Iraqi forces invaded Khuzestan in Iran, leading to a war that lasted until 1988. During the war between Iraq and Iran, Iraq used chemical weapons and committed genocide against Kurdish civilians. In 1990, Hussein ordered Iraqi forces to invade Kuwait, and a UN coalition drove them out of the country in early 1991 after Iraq ignored the deadline set by the UN Security Council. Iraq then signed a ceasefire agreement requiring them to dismantle their chemical and germ weapons programs. Though Iraq was defeated in the conflict, Hussein claimed that the country was victorious. In 1991, Kurdish and Shi-ite uprisings took place in Iraq, and between 100,000 and 180,000 people died as a result. In 2002, President George W. Bush spoke of an "Axis of Evil" that included Iraq, Iran, and North Korea in his State of the Union address, saying, "The Iraqi regime has plotted to develop anthrax, and nerve gas, and nuclear weapons for over a decade … Iraq continues to flaunt its hostility toward America and to support terror." Though UN inspections failed to find evidence of weapons of mass destruction, a coalition led by the U.S. invaded Iraq on March 20, 2003.

Within three weeks of the invasion, Iraq's military and government had collapsed, and Baghdad fell on April 9, 2003. Saddam evaded capture for months, but during Operation Red Dawn on December 13, 2003, American forces caught Hussein after finding him in a hole in the ground near an ad-Dawr farmhouse, and his trial took place under the Iraqi interim government. On November 5, 2006, Saddam was convicted of charges related to the 1982 killing of 148 Iraqi Shi'ites and was sentenced to death by hanging. Though he requested to be executed by firing squad, Hussein was hanged on December 30, 2006, at Iraqi army base Camp Justice. The following day, he was buried at Al-Awja, two miles from the resting place of his sons, Qusay and Uday. Saddam's tomb was reportedly destroyed in March 2015, but his body had been secretly removed eight months earlier by a Sunni tribal group.

In 1963, Saddam married his cousin, Sajida Talfah (the daughter of the uncle who raised him), a marriage that was arranged when he was 5 years old. They had two sons, Uday (born in 1964) and Qusay (born in 1966), and three daughters, Raghad (born in 1968), Rana (born in 1969), and Hala (born in 1972). While married to Sajida, Hussein married Samira Shahbandar in 1986 after forcing her husband to divorce her. Samira left Saddam to flee to Lebanon after the war, and though it's rumored that she had a child with him, some of his family members have disputed the claim. Hussein also reportedly married Nidal al-Hamdani and Wafa el-Mullah al-Howeish. Uday was originally considered Saddam's likely successor, but Qusay later became the favorite son due to Uday's erratic behavior, which included numerous rapes and car wrecks, feuding with other family members, looting during the Gulf War, torturing people who upset him, and murdering Kamel Hana Gegeo, who was Hussein's valet and food taster. Uday and Qusay were killed during a raid by U.S. forces on July 22, 2003.

While Hussein was in power, he reportedly built between 80 and 100 palaces all over Iraq. These palaces were home to Saddam, his family, mistresses, friends, and party officials. According to U.N. documents, there were eight main palaces, which included over 1,000 buildings, and they were decorated in marble and gold. After Hussein was deposed, the US Army occupied some of the palaces, and others were seized by the Iraqi government. 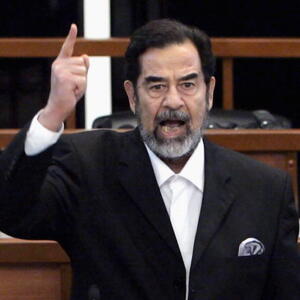