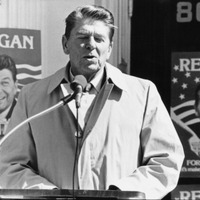 What was Ronald Reagan's Net Worth?

Reagan is remembered for his policies of economic deregulation, the War on Drugs, the Iran-Contra affair, attacks on protestors, and disregard for the AIDS crisis and the LGBTQ community.

Ronald Reagan was born on February 6, 1911 in Tampico, Illinois to low-income parents Jack and Nelle. He was of Irish Catholic, Scottish, and English descent, and had an older brother named Neil. The family lived briefly in various towns throughout Illinois, such as Galesburg, Monmouth, and Chicago. They then returned to Tampico before finally settling in Dixon. There, Reagan went to Dixon High School, where he developed interests in sports and acting. His first job was as a lifeguard at the Rock River in Lowell Park. For his higher education, Reagan attended Eureka College where he graduated in 1932 with a C average. During his time in college, he was a member of the swim and football teams.

Following his graduation from Eureka, Reagan worked in Iowa as a radio announcer for Chicago Cubs baseball games. While on the road with the Cubs in California in 1937, Reagan took a screen test that resulted in a seven-year contract with Warner Bros. studios. After spending his first years in Hollywood in the B-film unit, he had his first screen credit with a starring role in "Love is on the Air." By the end of the 30s, Reagan had appeared in 19 films, including "Sergeant Murphy," "Cowboy from Brooklyn," "Dark Victory," and "Naughty but Nice." In 1940, Reagan had one of his most famous roles in "Knute Rockne, All American," for which he earned the lifelong nickname of "the Gipper."

Reagan's star rose considerably in the 40s, largely thanks to his starring role as a double amputee in Sam Woods' "Kings Row." Following this, he costarred with Errol Flynn in the WWII film "Desperate Journey." Reagan was ordered to the military shortly after, but returned following his service to star in such films as "John Loves Mary," "Bedtime for Bonzo," "Cattle Queen of Montana," "Hellcats of the Navy," and the 1964 remake of "The Killers," which was his final film.

In 1941, Reagan was elected to the Board of Directors of the Screen Actors Guild. After the war, he returned to become third vice president. When the SAG president and a number of board members resigned in 1947 due to new union bylaws, Reagan was elected president. He went on to be reelected a total of six times throughout the 40s and 50s. During his tenure, Reagan notably advanced the Hollywood blacklist era, persecuting those believed to be loyal to communism.

Although he began as a Hollywood Democrat, Reagan moved to the right in the 50s and became a Republican in the 60s. He received national attention for his role as a leading spokesman in the campaign of presidential contender Barry Goldwater. After he gave his infamous "A Time for Choosing" speech, he became a prominent conservative figure. In 1966, Reagan was elected governor of California. In his first term, he froze government hiring and raised taxes. He also sent officers and National Guard troops to suppress anti-war protestors at the University of California, Berkeley, resulting in the death of a student and several other injuries. Despite unsuccessful attempts to recall him in 1968, Reagan was reelected as governor in 1970. 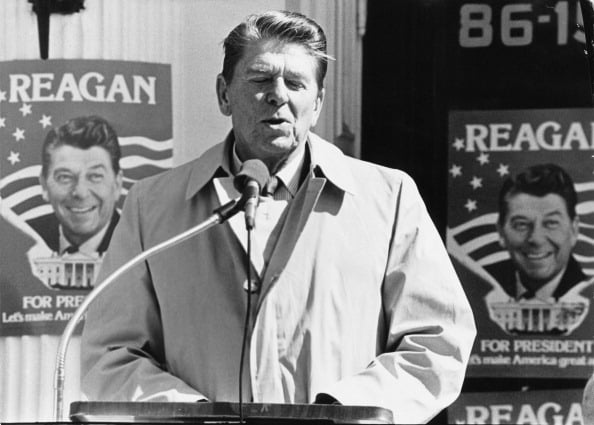 In November of 1979, Reagan announced his campaign for the Republican presidential nomination. In the election the next year, he defeated incumbent Democrat Jimmy Carter to become the 40th president of the United States. At just shy of 70 years old, Reagan became the oldest person to assume the position. He went on to win reelection in 1984 in a landslide victory over Democratic candidate Walter Mondale.

During his presidency, Reagan implemented neoliberal economic initiatives dubbed "Reaganomics." These involved tax rate reduction, economic deregulation, and cuts in government spending, which arguably benefited the wealthy at the expense of less fortunate.

Among Reagan's other accomplishments, he survived an assassination attempt in 1981. He continued to foster long-lasting societal damage when he initiated the War on Drugs, invaded Grenada, and fought against numerous labor unions. Additionally, he made cuts to domestic spending while increasing military spending, leading to a rise in federal debt.

Reagan's second term was dominated by foreign affairs, including the bombing of Libya, the Iran-Iraq War, and the infamous Iran-Contra affair, in which his administration covertly sold arms to the Khomeini government of Iran in order to illegally fund Contra rebels in Nicaragua. A major opponent of the USSR, Reagan also challenged Soviet General Secretary Mikhail Gorbachev to open the Berlin Wall, which eventually came down in 1989.

In 1940, Reagan married his first wife, Jane Wyman, with whom he had costarred in the film "Brother Rat." Together, they had daughters Maureen and Christine, and adopted a son named Michael. In 1948, Wyman filed for divorce. Subsequently, in 1949, Reagan met actress Nancy Davis. The pair married in Los Angeles in 1952. Ronald and Nancy Reagan had two children named Patti and Ron.

In 1994, Reagan announced that he had been diagnosed with Alzheimer's disease. Over the ensuing years, his public appearances grew less frequent as his disease progressed. Reagan passed away at his Los Angeles home in 2004 at the age of 93.

In 1989, the Reagans retired to a home in Bel Air, Los Angeles. Located at 668 Saint Cloud Road, the 1.5-acre property had a 7,200 square-foot mansion. Technically, a group of friends bought the home for the Reagans in 1986 for $2.5 million (that's the same as $6 million in today's dollars). Ron and Nancy leased the home with an option to buy at the $2.5 million purchase price. They exercised that option in 1989 upon leaving The White House.

Their immediate next-door neighbor was movie producer Jerry Perenchio. Jerry's property, known as Chartwell, was famous for being used in the opening credits of the original "Beverly Hillbillies" television show. After Nancy Reagan died in 2016, Jerry acquired the Reagan mansion for $15 million and incorporated it into Chartwell. Jerry razed the Reagan house to the ground to expand his gardens. Jerry died in May 2017. In August 2017 his heirs listed Chartwell for $350 million. They ultimately had to reduce the price several times before selling in December 2019 to Newscorp heir Lachlan Murdoch. The final sale price was $150 million which temporarily set the record for most expensive home sold in Los Angeles history. His record was broken two months later when Jeff Bezos paid $165 million for a Beverly Hills estate.