Raúl Castro Net Worth: Raúl Castro is a Cuban politician and revolutionary who has a net worth of $100 million. Raúl is the brother of Fidel Castro, the famous communist leader of Cuba who passed away in 2016. Fidel eventually stepped down in 2011, at which point Raúl Castro became the new First Secretary of Cuba. He also served as the President of the Council of State and President of the Council of Ministers from 2008 to 2018. Despite stepping down as President, Raúl is considered the political leader of the nation and oversees the current President, Miguel Díaz-Canel.

Prior to becoming involved in Cuban politics, Castro was the commander-in-chief of Cuba's Armed Forces, a position he held from 1958 until 2008. Raúl will also step down as First Secretary in 2021 during the Eighth Congress of the Communist Party of Cuba. At this point, he will be 90 years old.

Both Castro brothers have been famously shy about their personal fortunes. Fidel's net worth was generally believed to be $500 to $900 million. The Castro family allegedly controls more than a dozen commercial enterprises that had a collective value of at least $500 million based on comparable corporations. They have also reportedly stashed "several hundred million dollars" in secret bank accounts all over the world, primarily in Switzerland.

Early Life: Raúl Modesto Castro Ruz was born on June 3rd of 1931 in Birán, Cuba. Raised by a Spanish immigrant father alongside two older brothers and four sisters, Raúl quickly displayed issues with authority figures. All three Castro brothers were expelled from the first school they ever attended. After graduating from secondary school, Raúl studied social sciences. Fidel was an exemplary student, but Raúl fell behind. He was still very much involved in politics from an early age, however, and he joined the Socialist Youth. All three brothers participated in student protests, some of which turned violent.

Cuban Revolution: In 1953, the Cuban Revolution began, with Fidel and Raúl leading the charge. Fidel was a young lawyer at this point, and he petitioned for the overthrow of President Batista. After legal options failed, Raúl and Fidel decided to overthrow the government by force. They founded a paramilitary organization called "The Movement" and began stockpiling weapons. They also recruited approximately 1,200 followers.

Initially, Raúl and Fidel suffered terrible losses at the hands of government forces. An attack on the Moncada Barracks in Santiago met with disaster, as only a few rebels were able to escape into the mountains. The Castro brothers were caught soon afterward and were sentenced to more than 10 years in prison. However, the Batista government cowed under public pressure and released them in 1955.

During their time in exile, Raúl and Fidel made contacts with Communist figures in Mexico, and they also established ties with the KGB. Riots continued, and in 1956 the Castro brothers participated in the failed Granma landings. A boat carrying Che Guevera, the Castro brothers, and about 75 other revolutionaries landed on the shores of Cuba. Government forces killed most of them, and according to Raúl, he was part of a group of only 12 individuals who made it out alive. After hiding in the mountains, this group formed the core of the new rebel army.

Fidel trusted Raúl with more responsibilities as the younger brother began to prove his worth on the battlefield. He took part in the kidnapping of Canadian and American citizens, and he also captured the area of Maffo. That being said, historians aren't sure what to make of Raúl's abilities as a military leader. It seems as though most of the victories he participated in were conducted by other people, such as his brother.

Political Career: After the revolution was successful, Raúl had a more active role in Cuban politics. However, he was still very much a military man. It is rumored that he helped shoot down the Lockheed U2 that was carrying Major Rudolf Anderson during the Cuban Missile Crisis. When the Communist Party of Cuba was officially formed in 1965, he served as a member of its Central Committee.

Raúl also became the First Vice President of the Cuban Council of State of the National Assembly of People's Power when it was established in 1976. In addition, he became Vice President of the Council of Ministers during this period. When the Revolutionary Armed Forces were founded in 1959, Raúl Castro became the organization's Minister. He held this position until 2008.

In 2006, Fidel Castro underwent surgery on his intestine. Due to his illness, he stepped down as First Secretary, President, and Prime Minister. All of these titles were passed to Raúl. Since then, Raúl has continued to act as the head of state for Cuba. He is notably less charismatic compared to Fidel, and he makes fewer public appearances. Although his tenure as President was assumed to be temporary, Raúl won the election in 2008 and became the new President.

During his tenure, Raúl has overseen significant economic reforms. More products were available for purchase, such as DVD players and microwaves. Higher wages for employees who work for state-run companies followed, and Raúl also removed restrictions on travel and cell phones.

Perhaps his most noteworthy acts as President revolved around normalizing relations with the United States. Both companies re-established their embassies in each other's nations, and in 2015 the nations resumed full diplomatic relations. After the election of Donald Trump, however, Raúl became highly critical of US foreign policies, especially the proposed construction of a border wall on the Mexican border. In 2019, Raúl was banned from entering the United States after he supported the Maduro government in Venezuela. Americans argued that the Maduro regime had committed human rights abuses during the time when Raúl was supporting them.

Awards: Raúl Castro has won a number of awards over the course of his life. These include the Hero of the Republic of Cuba. China presented him with the Medal of Friendship, while the Soviet Union has awarded him with the Jubilee Medal, the Order of the October Revolution, and the Order of Lenin. 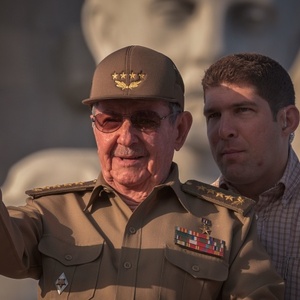