Rahul graduated from Rollins College and Trinity College, Cambridge. He worked at the Monitor Group and for Backops Services Private Ltd. Gandhi is a member of the Indian National Congress political party. He became a Member of Parliament for Amethi in May 2004. From September 2007 to January 2013 Gandhi served as General Secretary of the Indian National Congress. The office was abolished after Gandhi's term. In September 2007 he became Chairperson of the Indian Youth Congress and National Students Union when the offices were established. Gandhi became Vice-President of the Indian National Congress when the office was established in January 2013. Rahul's father Ravij Gandhi was Prime Minister of India and President of the Congress Party. His mother Sonia Gandhi is the current President of the Congress Party. His grandmother Indira Gandhi was assassinated in 1984 as Prime Minister. Gandhi lost out to Narenda Modi for Prime Minister of India in 2014. 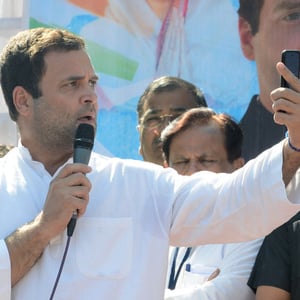