Rafael Correa Net Worth: Rafael Correa is an Ecuadorian politician who has a net worth of $2 million. Rafael Vicente Correa Delgado (better known as Rafael Correa) was born April 6, 1963 in Guayaquil, Ecuador. He is currently the President of the Republic of Ecuador and the former president pro tempore of the Union of South American Nations.

An economist educated in Ecuador, Belgium and the United States, he was elected president in late 2006 and took office in January 2007. In December 2008, he declared Ecuador's national debt illegitimate, based on the argument that the debt was contracted by corrupt and tyrannical prior regimes. He announced that the country would default on over $3 billion worth of bonds; he then pledged to fight creditors in international courts and succeeded in reducing the price of outstanding bonds by more than 60%. Correa brought Ecuador into the Bolivarian Alliance for the Americas in June 2009. Correa's administration has succeeded in reducing the high levels of poverty and unemployment in Ecuador as well. In stark contrast, Rafael Correa has been accused of authoritarianism, nepotism, attacking dissidents and curtailing freedom of speech. Correa's first term in office had been due to end on January 15, 2011, but the newly approved constitution written by the new National Assembly mandated general elections be held April 26, 2009. In that election, Correa won in the first round with 51.9% of votes counted. In the 2013 general election, Correa was elected president for a third time with 57% of the vote. 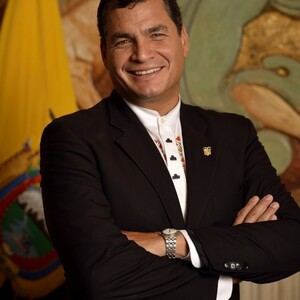