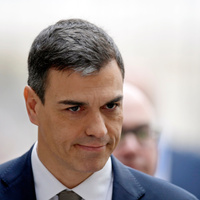 Pedro Sanchez was born in Madrid, Spain in February 1972. He is a member of the Spanish Socialist Workers' Party. Sanchez served as a member of the Congress of Deputies beginning in May 2019 and also served from January 2013 to October 2016 and from September 2009 to September 2011. He served as the Leader of the Opposition from July 2014 to October 2016 and again from June 2017 to June 2018. Pedro Sanchez served as the Secretary-General of the Spanish Socialist Workers' Party from July 2014 to October 2016 and then again starting in June 2017. In June 2018 he became the Prime Minister of Spain. He formed a coalition government supported by Unidas Podemos in 2020. Sanchez previously served on the Madrid City Council.