During the '90s, before entering politics, he served as Director of Military Intelligence, Presidential Chief of Staff under President Ramiro de Leon Carpio and as chief representative of the military for the Guatemalan Peace Accords. During his presidency thus far, he has made the controversial call for the legalization of drugs. During his time in the Guatemalan Army he served in the special forces (known as the Kaibiles), which had a reputation for brutality (he served as Director of Military Intelligence and as inspector-general of the army). In the general election in November 2003, the Patriotic Party aligned itself with two other parties in the Grand National Alliance. Molina is the first former military official to be elected to the presidency since Guatemala's return to democratic elections in 1986. Controversy has followed Molina. On November 11, 2000, his son Otto Pérez Leal was attacked by gunmen while driving with his wife and infant daughter. On February 21, 2001, three days before Molina was scheduled to launch his new political party, masked gunmen attacked and wounded his daughter Lissette. The same day, masked gunmen shot and killed Patricia Castellanos Fuentes de Aguilar, who had just departed her house after meeting with Molina's wife, Rosa María Leal. Human rights groups claimed the attacks were politically motivated. During the 2007 presidential campaign, several members of the Patriotic Party were killed by armed assailants; victims included Aura Marina Salazar Cutzal, a local woman who was secretary to the party's congressional delegation and assistant to Otto Pérez Molina. 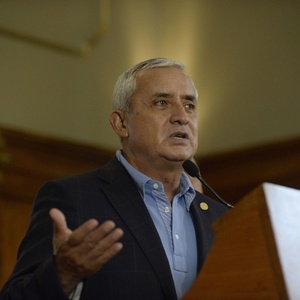