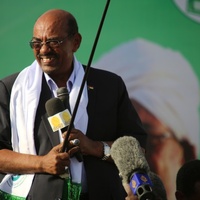 What is Omar al-Bashir's Net Worth?

Omar al-Bashir is a Sudanese politician who has a net worth of $1 billion. He served as President of Sudan from October 1993 to April 2019 when he was deposed in a coup d'état. Al-Bashir was a brigadier in the Sudanese army who led a group of officers in a military coup to oust Prime Minister Sadiq al-Mahdi in 1989. Omar al-Bashir was elected President three times, though the elections were scrutinized for possible corruption. He became the first sitting president indicted by the ICC for being director of a campaign of mass killing, rape, and pillaging against Darfur citizens in 2009.

WikiLeaks revealed that al-Bashir had embezzled state funds of $9 billion although the claims have been denied.

Al-Bashir was born on January 1, 1944 in Hosh Bannaga, a small village on the outskirts of Shendi. His family is of African-Arab descent. His mother was Hedieh Mohamed al-Zain and his father was Hassan ibn Ahmed, who worked as a smalltime dairy farmer. His uncle was Al Taib Mustafa, a journalism and politician who opposed South Sudan.

His family moved to Khartoum North when al-Bashir was entering secondary school. There he become a support of Al-Hilal. In 1975, he was sent to the United Arab Emirates as part of a Sudanese military attaché and was made a garrison commander upon his return.

In 1989, al-Bashir led a group of army officers in ousting the then unstable coalition government under Prime Minister Sadiq al-Mahdi in a bloodless military coup. After the coup, al-Bashir instated the Islamic military code on the national level and suspended all political parties. Al-Bashir assumed the posts of chief of state, prime minister, chief of the armed forced, and Minister of Defense. In 1993, he then appointed himself President of the country at which time he also disbanded any other rival factions or parties that had formed since the coup.

In 1996, al-Bashir was elected president with a five-year term, though he was the only candidate by law that ran in the election. At the same time, Hassan al-Turabi was elected to a seat in the National Assembly where he served as speaker of the National Assembly until al-Bashir sent troops and ousted him in 1999 during a palace coup. In 2000, al-Bashir was reelected by popular vote for a five-year term. He was then again elected in the 2005 election. From 2005 to 2010, a transitional government was set up under the 2005 peace accord that ended over two decades of conflict between the north and the south. The deal also allowed for the creation of a new political party – SPLM – in addition to al-Bashir's National Congress Party.

In 2010, al-Bashir was again reelected president in the first multi-party election in years. However, according to the 2005 peace accord, the leader of the SPLM party – Salva Kiir – also was elected to rule Sudan's semi-autonomous southern region. The 2010 election overall was marred with corruption and inequality and many observers criticized it as not meeting international fair election standards. Ultimately though, the election results stood and al-Bashir remained in power. Over the next couple of years, the Sudanese economy continued to grow, primarily due to oil drilling and extraction, but the growth was coupled with chronic inflation. The inflation prompted cost of living riots and anti-government demonstrations, especially within the Sudanese Workers' Trade Union Federation.

In addition to a myriad of problems within his country, al-Bashir was also involved in a number of international issues, including war crimes. One of the most treacherous parts of al-Bashir's legacy is his involvement in the war in Darfur, a region in Sudan. Al-Bashir has been accused of suppressing the region's non-Arab population and resorting to measures such as ethnic cleansing against Darfur's non-Arabs. Estimates of the number of deaths vary, as the Sudanese government claims the numbers are only around 10,000 while the United Nations has stated that around 300,000 have died as of 2010. The United States government has also officially called the situation in Darfur a genocide committed by the government of Sudan.

In addition to the war in Darfur, al-Bashir bears responsibility for the 21-year long civil war that was ongoing in Sudan when he took office in 1989 and was further prolonged and made worse under his leadership. He allegedly looted the country of much of its wealth and siphoned it to various international banks.

In April of 2019, al-Bashir was ousted from his post by the Sudanese Armed Forces after decades in power. He was then placed under house arrest and all of his ministers were also arrested, dissolving the National Legislature and forming a Transitional Military Council. Al-Bashir was soon after moved to Kobar Prison and was convicted for money laundering and corruption.

Indictment by the International Criminal Court

After completion of the money laundering and corruption trial, the acting Sudanese military government agreed to transfer al-Bashir to the ICC. The ICC had over the years charged al-Bashir with a number of international crimes but struggled to hold him accountable due to jurisdictional challenges.

In 2008, the ICC had accused al-Bashir of individual responsibility for genocide, crimes against humanity, and war crimes committed in Darfur. An arrest warrant was issued for al-Bashir in 2009, making al-Bashir the first head of state ever indicted by the ICC. However, the Arab League and the African Union condemned the warrant and many states where al-Bashir since visited, including China and Saudi Arabia, refused to arrest him and surrender him to the ICC, as international law requires. In general, the charges against al-Bashir were largely ignored and the Sudanese government retaliated by expelling a number of international aid organizations from the country. Only after his arrest and ousting in by the Sudanese military in 2019 have the charges been taken more seriously.

A wikileak cable from 2009 speculated that Omar al-Bashir has stashed $9 billion in foreign bank accounts. A prosecutor named Luis Moreno-Ocampo told officials from the US government that hundreds of millions and potentially billions of dollars worth of siphoned oil funds are sitting in London banks alone.