How much is Nicolas Sarkozy Worth?

Nicolas Sarkozy net worth and salary: Nicolas Sarkozy is a French politician who has a net worth of $12 million. Nicolas Sarkozy was born Nicholas Paul Stephane Sarkozy de Nagy-Bocsa in Paris, France in January 1955. He is probably most famous for being the 23rd President of France, serving from May 2007 to May 2012. Sarkozy was a leader of the Union for a Popular Movement and has previously served as Minister of the Interior and Minister of Finances. He also served from 2004 to 2007 as president of the General council of the Hauts-de-Seine department, as well as the mayor of Neuilly-sur-Seine from 1983 to 2002. During his term as President, Sarkozy dealt with the Arab Spring and the financial crisis of the late 2000s. In 2008 he married his third wife, singer Carla Bruni. He retired from politics after losing the 2012 election to Francois Hollande by just over a million votes. He more than doubled his yearly salary in one of his first Presidential actions. Vanity Fair named Sarkozy their 68th best-dressed person in the world. He has also been voted the third worst-dressed person by GQ. He has been involved in some controversies including a book he co-authored arguing that people should not be brought up solely on republican values. 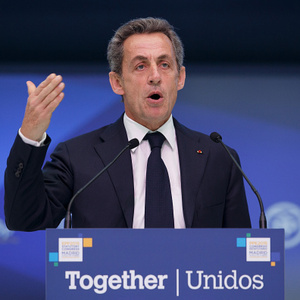