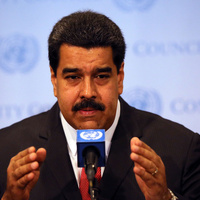 Nicolas Maduro Net Worth: Nicolas Maduro is a Venezuelan politician who has a net worth of $2 million. Nicolas Maduro was born in Caracas, Venezuela in November 1962. Maduro is the current President of Venezuela. Nicolas became interested in politics on his high school's student union. For many years he worked as a bus driver before becoming a trade unionist for bus drivers in the Caracas Metro system. Maduro was also a bodyguard for Jose Vicente Rangel during his 1983 presidential campaign. Nicolas was instrumental in the founding of the Movement of the Fifth Republic. Maduro became associated with the United Socialist Party in 2007. From January 2005 to August 2006 he served as Speaker of the National Assembly. Maduro served as Minister of Foreign Affairs from August 2006 until January 2013 under President Hugo Chavez. Maduro also served under Chavez as Vice President of Venezuela from October 2012 to March 2013. After Chavez passed away in march 2013 Maduro assumed the role of President until a special election was held and he won by 1.5% and assumed office in April 2013. Maduro initiated the Safe Homeland program to build security in the country. He was named as one of TIME Magazine's 100 Most Influential People in 2014.