Nelson Mandela Net Worth: Nelson Mandela was a South African political activist, anti-apartheid revolutionary, politician, and philanthropist who had a net worth of $1 million at the time of his death in December of 2013. Nelson Mandela served as President of South Africa from 1994 to 1999.

Wealth Details: The majority of Mandela's net worth came in the form of book royalties from his best selling autobiography, 1994's "Long Walk to Freedom". When his health was better, Nelson was also a semi-active public speaker. When he was President, Mandela slashed his salary and then on top of that still gave 1/3 of his pay to South African children's charities.

Towards the end of his life, Mandela's family waged a fairly bitter war over his wealth. Nelson was married three times and had six children (only three of whom were still living at his death). Nelson placed the majority of his wealth into more than a dozen different trust funds that would simultaneously benefit his children and prevent them from further bickering. Because of these trusts, Nelson himself was not an extraordinarily wealthy man at the time of his death. A long time friend and lawyer named George Bizos declared in April 2013:

"If anyone suggests he's a multi-millionaire, they're wrong. He's not a rich man. He has a couple of trusts for his children and grandchildren. His earnings are technically nil, other than the goodwill of people inside and outside South Africa who helped with the education of the children. He has always insisted that money donated should be used for building schools and hospitals".

Early Life: Nelson Rolihlahla Mandela was born on July 18th, 1918 in the town of Mvezo in Umtata, which was part of South Africa's Cape Province. His middle name means "troublemaker" in his native Xhosa language. His paternal great grandfather was king of the Thembu people who lived in what is currently South Africa's Eastern Cape Province. His father was a local chief and councilor to the monarch. He was a polygamist and had four wives, four sons, and eight daughters. Mandela's mother was his third wife, and he grew up in the village of Qunu with his two sisters. When he was seven, his mother sent him to a nearby Methodist school, and it was there that he was given the English name of "Nelson." His father passed away from what was thought to be lung disease when he was nine years old. After his father's death, his mother sent him to live at a palace in Mqhekezweni, and he placed under the guardianship of a Chief and his wife. He became a devout Christian and attended another Methodist school. When he was fifteen, he began his secondary education at Clarkebury Methodist High School, which was one of the largest Western-styled institutions for Africans in the Eastern Cape Province. In 1939, he went to the University of Fort Hare to obtain a Bachelor of Arts degree, and he studied English, anthropology, politics, and native administration. He was active in the school community, taking up ballroom dancing, performing in the drama society's productions, and teaching Bible studies. He was suspended from the university after participating in a boycott over the poor quality of food and did not return to finish his degree. Instead, he moved to Johannesburg and enrolled at the University of South Africa in order to finish his education. After earning his Bachelor of Arts degree, he decided to pursue a career in law.

Legal Studies and Early Activism: Mandela enrolled at University of the Witwatersrand to pursue his law degree, and as the only black student, he was a frequent target of racism. Around this time, he began to believe that South Africans should have the right to political self-determination. By 1948, he was actively supporting anti-apartheid measures through boycotts and strikes. His involvement in politics and activism distracted from his studies, and he did not receive a law degree. In 1950, he became president of the African National Congress (ANC) and was also elected president of the ANCYL. While he had previously been opposed to communism, his attraction to it grew after reading the literature of Karl Marx and Vladimir Lenin. In 1952, he got a job at the H.M. Basner law firm, and he along with other anti-apartheid activists started to prepare for their Defiance Campaign against Unjust Laws. The campaign was intended to follow a path of peaceful resistance and was inspired by Mahatma Gandhi. In the summer of 1952, he was arrested and convicted of statutory communism, which was a charge often brought against anti-apartheid figures. He received a sentence of nine months of hard labor, which was suspended for two years. The next year, he obtained his law degree and opened the nation's only African-run law firm. 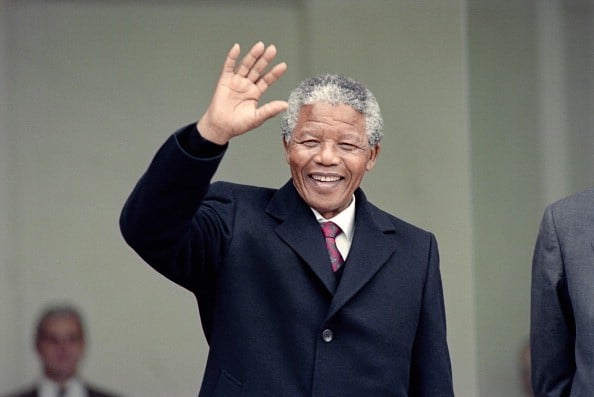 Resistance and Treason Trial: In the beginning of 1955, Mandela realized that the path of peaceful resistance would not be successful in ending apartheid. With the collaboration of other African nationalist and anti-apartheid groups, he helped draw up a Freedom Charter, which demanded a democratically run, non-racialist government. In 1956, he was officially accused of high treason against the state, and his trial began in August of 1958. He and the other defendants successfully filed a motion to have the three judges presiding over the case replaced, and following their replacement, the charges were amended to accuse ANC leadership of treason by advocating for revolution. His treason trial was resolved in March of 1961 with a verdict of not guilty. Soon after, he organized with nationalist groups to engage in sabotage of key infrastructural elements in the country with the goal being to pressure the government, not to harm individuals.

Prison to Presidency: In August of 1952, Mandela was arrested and charged with inciting strikes and leaving the country without permission. He was found guilty and sentenced to five years in prison. In July of 1953, he and other activists were charged with sabotage and conspiracy to violently overthrow the government. They used the trial to highlight their cause, and Mandela gave his famous "I Am Prepared to Die" speech during the trial. The defendants were found guilty and sentenced to life in prison. Mandela spent eighteen years at a prison on Robben Island beginning in 1964. The conditions were initially very poor, and he was allowed few visitors. He was transferred to Pollsmoor Prison in Cape Town in 1982, and two years later he was offered to be released on the condition that he vow to never use violence as a political weapon. He refused the offer and was released in 1990 with no conditions. Mandela continued to fight to end apartheid, and although there was civil unrest resulting in casualties, he was elected President of South Africa in 1994 and successfully transitioned the nation away from apartheid minority rule and into a democracy.

Personal Life: Mandela retired from politics in 1999 but continued his philanthropic activities. He earned much of his wealth from the royalties from his 1994 autobiography "Long Walk to Freedom." Hw was married three times. He married Evelyn Mase in 1944, and they had three children before divorcing in 1954. He then married Winnie Mandela in 1958, and they had two children and separated in 1999. His final marriage was to Graáa Mache in late 1998. Mandela died on December 5th, 2013. He is buried in Qunu in the Eastern Cape Province. 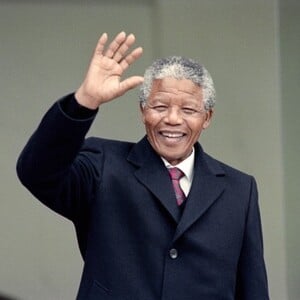