Narendra Modi net worth: Narendra Modi is an Indian politician who has a net worth of $100 thousand. Narendra Modi was born in Vadnagar, India in September 1950. He is a member of the Bharatiya Janata Party. Modi became the 14th Prime Minister of India in May 2014. He graduated from the University of Delhi and Gujarat University.

Modi served as a Member of the Gujarat Legislative Assembly for Maningar from January 2002 to May 2014. He assumed the office of Member of the Lok Sabha for Varanasi in May 2014. Modi also served as the Chief Minister of Gujarat from October 2001 to May 2014. He is a member of the right-wing Rashtriya Swayamsevak Sangh and is a Hindu nationalist. He worked for the RSS and was forced into hiding during the state of emergency in 1975. He is said to have an exclusionary social agenda as evidenced by the 2002 Gujarat riots. 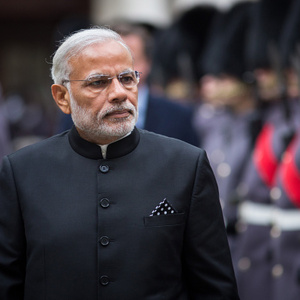