Muammar Gaddafi net worth: Muammar Gaddafi (Muammar Abu Minyar al-Gaddafi) is the former president of Libya, and, at a certain point in his life, it is believed that Muammar Gaddafi possessed a net worth of $70 billion. If this information is accurate, this would have made him one of the wealthiest people on the planet.

Muammar Gaddafi was the longest serving ruler of Libya since the Ottoman Empire, and the longest non-royal ruler still living at the time of his death. His forty-two-year reign has been the subject of much controversy and internal unrest. As of February 2011, political unrest within the country boiled over into full-scale violence, largely perpetrated by the military against civilian protesters.

Gaddafi was forced out of office and onto the run from rebel forces. Both the United States government and NATO encouraged Gaddafi to turn himself in and liberate his country from continued violence. On October 20th, 2011, after several months on the run, Muammar Gaddafi was captured by rebel forces and executed.

Early Life: It is believed that Gaddafi was born Muammar Muhammad Abu Minyar al-Gaddafi circa 1942 near Sirte, Italian Libya. He was born into a poor Bedouin family and he became an Arab nationalist while still attending school in Sabha. Later, he enrolled in the Royal Military Academy in Benghazi. While in the military, Gaddafi founded his own revolutionary group, a group which deposed the then Western-backed Senussi monarchy of Idris, which culminated in a coup that took place in 1969.

Education/Politics: Gaddafi had a foundational education that was religious in nature and imparted by local Islamic educators.

Gaddafi was a prolific scholar, progressing through six grades in just four years. In his school years, Gaddafi was often bullied and picked on due to his Bedouin roots. However, he remained proud of his heritage and unshakeable in his beliefs, inspiring pride in other Bedouin learners/children. Gaddafi was early friends with Abdessalam Jalloud, who would go on to become Prime Minister of Libya from 1972-1977.

1969 Coup: During the middle part of 1969, The Monarchy of Idris became vulnerable as Idris travelled abroad. Gaddafi and his Free Officers recognized this as a prime opportunity to overthrow this monarchy, which incited "Operation Jerusalem".

After removing the monarchical government, Gaddafi announced the foundation of a new Libyan Arab Republic.

Economic Reform Efforts: Crude oil was his country's primary export at the time and Gaddafi was seeking ways to further enrich and improve Libya's rich oil sector. His efforts led to a global increase in crude oil prices and measures he personally put in place ended up bringing Libya $1 billion in estimated additional oil revenues — just in the first year.

Foreign Relations: Gaddafi was vocal and especially critical of US support of Israel. He sided with Palestinians in Israeli–Palestinian conflicts and opposed the 1948 creation of the State of Israel, viewing this himself as Western colonial occupation influence that was forced upon the larger Arab world.

Gaddafi believed that Palestinian violence that was performed against Israeli and Western targets was justified and the response of a deeply oppressed people fighting against colonization of the people's sacred land.

US Conflicts: In the early-to-mid 1980s there was a tremendously growing sense of economic trouble happening in Libya. The country's annual oil revenues had dropped from $21 billion to $5.4 billion, and Gaddafi was dead set on focusing on irrigation projects that would counteract this deeply detrimental effect.

In 1983 Libya commenced its largest (and most expensive) infrastructure project — the Great Man-Made River, which fell behind schedule and remained incomplete up to the start of the 21st century.

In the early 80s, US President Ronald Reagan adopted a hardline approach when it came to Libya and claimed it to be a puppet regime of the Soviet Union, drawing on American fear of communism. As a response, Gaddafi played up his own relationship with the Soviet Union as well as threatened to join the Warsaw Pact. Soviets nevertheless were cautious of Gaddafi, many seeing him as an unpredictable extremist that being in cahoots with was undesirable at best. During the Spring season of 1986, the US Navy performed exercises and demonstrations located in the Gulf of Sirte. The Libyan military met this act with retaliation and the US responded by sinking several Libyan ships as a result.

Gaddafi's Link to Africa: When the 20th century came to an end; Gaddafi had grown increasingly frustrated from what he viewed as the failures of pan-Arab ideals. Gaddafi was beginning to reject his Arab nationalistic ideals and grew more and more in favor of pan-Africanism, which highlighted and celebrated Libya's African identity.

In June of 1999, Gaddafi would go on to visit Nelson Mandela in South Africa. The following month he attended the OAU summit which occurred in Algiers, where he called for stronger political (and economic) integration, further championing and advocating the establishment of a United States of Africa. At this point Gaddafi would become one of the founding members of the African Union (AU), which was established in July of 2002, replacing the OAU.

Death: During the 2011 Arab Spring there were intense protests that occurred against what was believed to be widespread corruption, not to mention the fact that intense unemployment was running rampant throughout eastern Libya. Civil war came as a result. NATO saw it fit to intervene militarily, siding with the anti-Gaddafist NTC (National Transitional Council). As a result, the government in power was overthrown. In response, Gaddafi retreated to Sirte, where he would be captured and subsequently killed by NTC militants.

Wealth: Evidence is now pointing to Gaddafi having a vast hidden fortune of assets in bank accounts, real estate and investments around the world. His personal control over Libya's vast oil fields are believed to be the primary contributor to his wealth. It's possible that Gaddafi was worth as much as $200 billion at the time of his death. This would have made him the richest person on the planet — by a long shot. 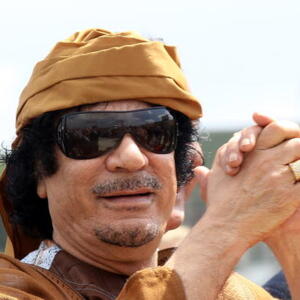