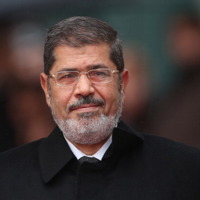 Mohamed Morsi Net Worth: Mohamed Morsi is the former President of Egypt who has a net worth of $500 thousand dollars. Born in El-Adwah, Sharqia Governorate, Egypt, in 1951, Mohamed Morsi earned his education largely in his native country before winning a scholarship from his home government to study abroad in the United States. Morsi received his PhD from the University of Southern California. He worked as an assistant professor and with NASA in the U.S. before he returned to Egypt during the mid-80's to teach in his home country. Morsi's parliamentary career began in 2000; he served in Parliament for five years as an independent candidate, though he was part of the Guidance Office of the Muslim Brotherhood. In 2011, Morsi joined the Freedom and Justice Party as the inaugural party president. That year, he was taken prisoner along with several others from the Muslim Brotherhood; Morsi escaped his captors several days later. In 2012, he became the presidential candidate for the Muslim Brotherhood, winning election on June 24th with just over 51 percent of the vote and becoming the first person to be democratically chosen as Egypt's head of state. He took unlimited power as president, and, within a year, protesters were calling for his resignation. The Egyptian military unseated Morsi on July 3, 2013 in a coup d'etat. As a result, Morsi was forced out of office and the state's current Constitution was suspended in favor of a new one. Adly Mansour became Egypt's acting president before a new election. After Morsi's presidency, there were widespread arrests of Muslim Brotherhood supporters. On September 1, 2013, it was announced that Morsi would stand trial in his home country on a slew of charges.