Michelle Bachelet Net Worth: Michelle Bachelet is a Chilean politician who has a net worth of $3 million. (Verónica) Michelle Bachelet (Jeria) was born September 29, 1951 in Santiago, Chile. She previously served as President (2006–2010), becoming the first woman in her country to do so. After leaving the presidency, she was appointed the first executive director of the newly created United Nations Entity for Gender Equality and the Empowerment of Women (UN Women).

In December 2013, Bachelet was re-elected as President of Chile with over 62% of the vote. She was the first person since 1932 to win the presidency of her country twice. Bachelet, a physician with studies in military strategy, served as Health Minister and Defense Minister under her predecessor, President Ricardo Lagos. Aside from her native Spanish language, she also speaks, English, German, Portuguese and French. After a time of much upheaval and even exile during her childhood (her father and her family were tortured under charges of treason by the government of Salvador Allende, a former President of Latin America), the Bachelet family eventually returned to Chile. After Chile made a transition to democracy in 1990, Bachelet worked for the Ministry of Health's West Santiago Health Service and was a consultant for the Pan-American Health Organization, the World Health Organization and the German Corporation for Technical Cooperation. In March 2000, Bachelet-virtually unknown at the time-was appointed Minister of Health by President Ricardo Lagos. In January 2002, she was appointed Minister of National Defense, becoming the first woman to hold the post in a Latin American country and one of the few in the world. In late 2004, Bachelet was established as the only CPD figure who might be able to defeat Joaquín Lavín and she was asked to become the Socialists' candidate for presidency. Bachelet was sworn in as President of the Republic of Chile on March 11, 2006. 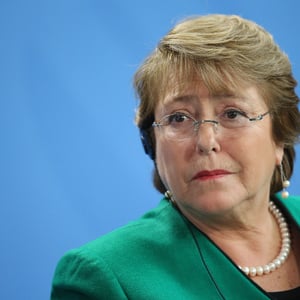