He joined the Revolutionary Guard and reportedly worked covert operations in the '80s during Iran's war with Iraq. After four years as a provincial governor (1993-97), Ahmadinejad became a lecturer at Tehran's University of Science and Technology. He was subsequently elected as mayor of Tehran in 2003. He was not well known internationally until June of 2005, when he won Iran's presidential election. Ahmadinejad's support comes in part from those who oppose U.S. foreign policy, and early on President Ahmadinejad's rhetoric matched his promises to defy the U.S., most notably on the issue of Iran's plans for nuclear technology. He made headlines in 2005, earning a United Nations rebuke, when he publicly opined that Israel should be "wiped off the map" and later described the Holocaust as a "myth. Ahmadinejad won re-election in 2009 against former prime minister Mir-Hossein Mousavi, but Mousavi supporters refused to accept the results and took to the streets in mass demonstrations; an official investigation into the election was called for by Iran's supreme leader Ayatollah Ali Khamenei but Ahmadinejad emerged still in power. Limited to two terms by Iran's constitution, he was succeeded in 2013 by Hassan Rouhani (Ahmadinejad had supported Rouhani's opponent, Esfandiar Rahim Mashaei). Ahmadinejad is married and has one daughter and two sons. His oldest son married the daughter of Esfandiar Rahim Mashaei in 2008. On February 4, 2014, Ahmadinejad wrote an open letter to The News Time, offering his own reflective look at his presidency. 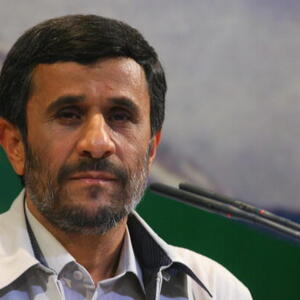