Lyndon B. Johnson Net Worth

in Richest Politicians › Presidents
Lyndon B. Johnson Net Worth:
$100 Million

Lyndon B. Johnson Net Worth: Lyndon B. Johnson was the 36th President of the United States of America who had a net worth of $100 million. Lyndon Baines Johnson was born in 1908 in Stonewall, Texas, and studied at what is now known as Texas State University. He became the student newspaper editor and began teaching after graduation.

Johnson made his first jump into politics by working on Welly Hopkins' 1930 campaign for Congress. Five years later, he became leader of the Texas National Youth Administration, which enhanced his ability to persuade the government to better educational opportunities. Within two years, he decided to leave the job to run for Congress, and he won, serving from 1937 until 1949. While a Congressman, Johnson joined the U.S. Naval Reserve as a commissioned officer. Johnson ran for Senate in the late '40s and won the election. By 1951, he became the Senate Majority Whip for the next two years. When Republicans took control of Congress, Johnson became the minority leader. Within four years, Johnson had a heart attack that nearly killed him and he immediately quit his 60-cigarette-per-day habit. Soon after, he became the Senate Majority Leader from 1955 until 1961, when he was sworn in as Vice President of the United States during John F. Kennedy's presidency. After JFK's assassination, Johnson was sworn in as the 36th U.S. President on November 22, 1963. He ran for election in 1965 with Hubert Humphrey, winning his first full term in office. As president, Johnson is credited with creating "Great Society" laws that protected civil rights, the environment, broadcasting, and Medicare and Medicaid. Johnson also launched the War on Poverty to improve urban America. During his presidency, the Vietnam War continued to escalate with more U.S. troops deployed to combat zones. The American involvement overseas sparked massive protests domestically. Though Johnson was widely popular at the time of his election, American support dwindled for LBJ as his term continued, and he opted not to run for a second full-term.

Once out of office, Johnson returned to his hometown. Within a few years, Johnson's health began to decline and he passed away on his ranch on January 22, 1973 from a heart attack. He is buried near his hometown at the Lyndon B. Johnson National Historical Park. 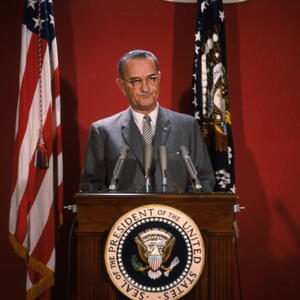