Solís led in the 2014 presidential election and he was effectively handed the presidency after the runner-up in the first round, San José mayor Johnny Araya Monge, ceased active campaigning. Solís has held various academic as well as consulting positions. Between 1981 and 1987, he was an associate professor at the University of Costa Rica; he was a Fulbright Scholar at the University of Michigan from 1983 to 1985. During this time, Solís worked with the Arias administration and eventually became director of the Center for Peace and Reconciliation. He went on to work with the Academic Council of the United Nations System, the International University and as a researcher for the Latin American and Caribbean Center, where he analyzed political and social events in Latin America. Solís has published numerous essays and books about national and international affairs. In '90s, he wrote for La República, a daily newspaper based in San José. His writing focused on civil society, international relations and trade and has been published by Foreign Affairs Latinoamérica, Frontera Norte, Espacios and Global Governance. Solís announced his candidacy for president on November 27, 2012. In the PAC's primary, he ran against Epsy Campbell Barr, Juan Carlos Mendoza García, and Ronald Solís Bolaños, winning with 35 percent of the vote, only 110 votes more than Juan Carlos Mendoza García. In October 2013, he chose Helio Fallas and Ana Helena Chacón Echeverría as his Vice-Presidential running mates. Solís claimed he would clean up corruption, create major investments in infrastructure and shore up Costa Rica's universal health care and social security system.

Solís took office on May 8, 2014. Solís is married to Mercedes Peñas and they have six children. In addition to public service and academics, Solís enjoys farming. 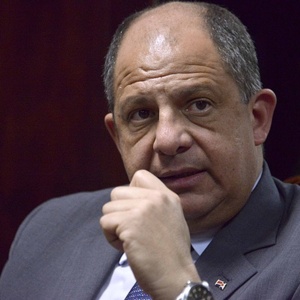