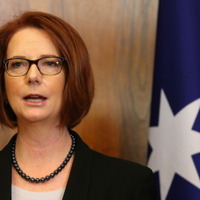 Julia Gillard net worth: Julia Gillard is a former Australian (27th) Prime Minister of Australia who has a net worth of $2 million dollars. Born September 29, 1961 in Barry, Vale of Glamorgan, United Kingdom, Julia Gillard is a former politician and was the Australian Labor Party leader from 2010 to 2013. She has been a member of the Australian Parliament since 1998. Educated at the University of Melbourne in the '80s, Gillard subsequently joined a law firm, where she specialized in industrial law, after which she entered into politics. After being elected to the House of Representatives in 1998, she was elected to the Shadow Cabinet three years later, where she was given the portfolio of Population and Immigration. Gillard became the first female Deputy Prime Minister of Australia in the 2007 federal election. She lost the leadership of the Labor Party to Kevin Rudd in June of 2013. During her speech, congratulating Rudd, she announced that she would immediately tender her resignation as Prime Minister to the Governor-General, Quentin Bryce. Her political view/positions include support of legal abortion, uncertainty about the safety issues of euthanasia and opposition of same-sex marriage. Gillard has been in a relationship with Australian hairdresser Tim Mathieson since 2006.