A member of the conservative National Party of Honduras, he was the President of the National Congress of Honduras between January 2010 and June 2013. He is a lawyer who graduated from the Universidad Nacional Autónoma de Honduras, where he was President of the Association of Students (1988-89). He is also a graduate in social and legal sciences with a master's degree in public administration from the State University of New York and studied legislation at the Universidad Nacional Autonoma de Honduras. He is a businessman in coffee cultivation in his native Gracias and in the radio and television industries as well as being an owner of hotels. He gained notoriety/infamy in Honduras when Liberal leader Rafael Pineda Ponce described him as a "cipote malcriado" (spoiled kid). He began his presidential campaign in July 2013 in Intibucá and La Paz with a campaign entitled El Pueblo Propone (The People Propose in English). 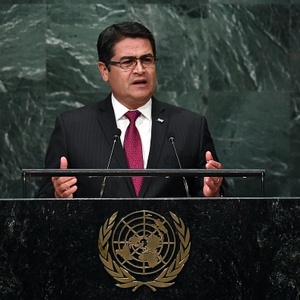