Juan Manuel Santos Net Worth: Juan Manuel Santos is a Colombian politician who has a net worth of $2 million. Juan Manuel Santos (Calderón) was born August 10, 1951 in Bogotá, Colombia. He is the current President of Colombia (since 2010). He was also Minister of Defense from 2006-09. An economist by profession and a journalist by trade, Santos is a member of the wealthy and influential Santos family, who from 1913 to 2007 were majority shareholders of the El Tiempo newspaper. Santos is also first cousin to Francisco Santos Calderón, former Vice President of Colombia. Shortly after graduating from the University of Kansas he also attended the London School of Economics and Political Science. Santos rose to prominence during the Administration of President Álvaro Uribe Vélez. In 2005, he co-founded and led the Social Party of National Unity, a liberal-conservative party coalition that backed the policies of President Uribe. In 2006, after Uribe was successfully re-elected, Santos was appointed Minister of National Defense and continued defending the security policies of President Uribe, taking a strong and forceful stance against FARC and the other guerrilla groups operating in Colombia. He oversaw rescue operations of hostages, including Operation Jaque, which led to the rescue of former presidential candidate Íngrid Betancourt, three American citizens and 11 other members of the Colombian Army that had been held for several years. Though widely viewed as the heroic endeavor that cemented Santos' popularity, the rescue was also criticized for misappropriating emblems of the International Red Cross, a violation of the Geneva Conventions. 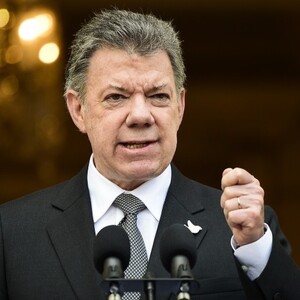