He starred in more than 100 films and used his popularity to transition to politics. Estrada is a member of the PMP party and has also been affiliated with the Nacionalista party, Liberal Party, UNA, and Communist Party of the Philippines. From 1969 to 1986 he served as Mayor of San Juan, Metro Manila. Estrada served as Senator of the Philippines from 1987 to 1992. From 1992 to 1997 he served as the Chairman of the Presidential Anti-Crime Commission under President Fidel V. Ramos. From 1992 to 1998 he also served as the 11th Vice President of the Philippines under President Ramos. Joseph married Dr. Luisa Pimentel Ejercito in 1959. IN 2001 he was ousted as the President in a people's revolt. He was convicted of taking bribes and kickbacks while being President and was sentenced in life in prison and a fine of over $15 million dollars. He was later pardoned by President Gloria Macapagal-Arroyo. 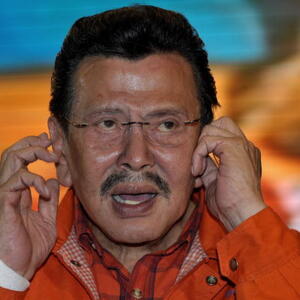