John F. Kennedy Net Worth: John F. Kennedy was an American politician and the 35th President of the United States who had a net worth of $12 million at the time of his death. That's the same as $100 million in today's dollars after adjusting for inflation. JFK was assassinated on November 22nd 1963, in Dallas by Lee Harvey Oswald. Thanks to valuable family trusts, had JFK lived into his 60s or 70s, he likely would have died with a net worth equal to more than $1 billion inflation-adjusted dollars.

Family Fortune: JFK inherited his fortune from his father, Joseph. In 1957, Fortune Magazine estimated Kennedy's net worth at $200 – $400 million which made him one of the 15 richest people in the country. Often recounted as having mad his fortune bootlegging alcohol during prohibition, that's more fiction than fact. In reality, Joseph earned his fortune in the stock market then parlayed that money into a highly lucrative real estate empire. He even invested in movie studios and film production. According to legend, Joe decided to sell every share of stock he owned just before the stock market crash of 1929 after being spooked that his shoe-shine boy was investing in stocks and giving HIM stock tips. After the crash Joe reinvested his funds right back into the market and made an enormous personal fortune. At the time of his death in 1969, Joe Kennedy was worth the inflation-adjusted equivalent of $2.6 billion. To this day, Kennedy family members benefit from trusts set up by Joseph decades earlier. Joseph's surviving children received the equivalent of hundreds of millions through trusts and dividends. When JFK Jr died in 1999 – 36 years after his father died and 30 years after his grandfather died, the younger JFK's estate was valued at $100 million. Today John's sister Caroline is worth $250 million.

Early Life: John Fitzgerald Kennedy was born on May 29th, 1917 in Brookline, Massachusetts, a suburb outside of Boston. His father, Joseph Kennedy Sr., was a businessman and politician who served as the chairman of the SEC and then US Ambassador to the UK. His mother, Rose Kennedy, was a philanthropist and socialite. They were an Irish Catholic family, and at the time of John F. Kennedy's birth, they had already developed a historical reputation of political achievement. Kennedy grew up in Brookline until being sent to the elite Choate Rosemary Hall college preparatory boarding school in 1931. He suffered from numerous health issues as a child and teenager, primarily gastrointestinal issues that sometimes required hospitalization. He had intended on studying at the London School of Economics, but due to his health issues, he chose to enroll at Princeton University instead. His illness forced him to leave after two months, and after taking a year off to focus on his health, he applied to and was accepted at Harvard. In college, he was on the swim team and in the sailing club. He embarked on various sailing trips to and throughout Europe during his time at Harvard. In September of 1938, Kennedy visited his father in the United Kingdom who was working as the US Ambassador to the UK, and he was in the UK House of Commons when the nation formally declared war on Germany. Following this experience, his interest in politics grew, and he became more serious in his studies at Harvard. His senior thesis, originally titled "Appeasement in Munich" later became a best-seller under the title "Why England Slept."  In 1940, he graduated cum laude with a bachelor's degree in government with a concentration on international affairs, and he decided to continue his education, enrolling at the Stanford Graduate School of Business. However, he took a break from academics not long after he began his studies and went to help his father write his memoirs regarding his role as Ambassador during World War II.

Military Service: In 1941, Kennedy joined the United States Naval Reserve and worked at the Office of Naval Intelligence for a period until being assigned to Panama and later to the Pacific. In 1943, he became commander of the PT-109 naval ship, which was based in the Solomon Islands. The ship was attacked by the Japanese, and it started to sink. Kennedy asked his crew whether they wished to fight or surrender, and they chose the former. They swam nearly four miles to Olasana Island and were rescued after five days. It took Kennedy over a month to recover and return to duty. He continued to serve in the Navy for four more years and was frequently hospitalized for back problems. He retired from the service in 1945.

Political Career: Kennedy's older brother, Joe, served as a pilot in the military and was killed in the line of duty in 1944. Joe had intended on going into politics, and after Kennedy completed his military service, he briefly considered a career in journalism before deciding to pursue politics. Kennedy's father encouraged U.S. House Representative James Michael Curry to retire and run for mayor of Boston. Kennedy moved to Boston to establish residency, and he began campaigning for the House of Representatives seat in the 11th congressional district of Massachusetts. He easily won in the democratic primary, and he won in the general election with 72% of the vote. He remained in the House for six years and began campaigning for the 1952 senate election as early as 1949. He easily won the Senate election, but he was beset by numerous health issues early in his term and was frequently absent. Kennedy gave the speech introducing Adlai Stevenson as the presidential candidate at the 1956 Democratic National Convention. Stevenson allowed the Convention to choose his vice president, and Kennedy came in second after Senator Estes Kefauver. 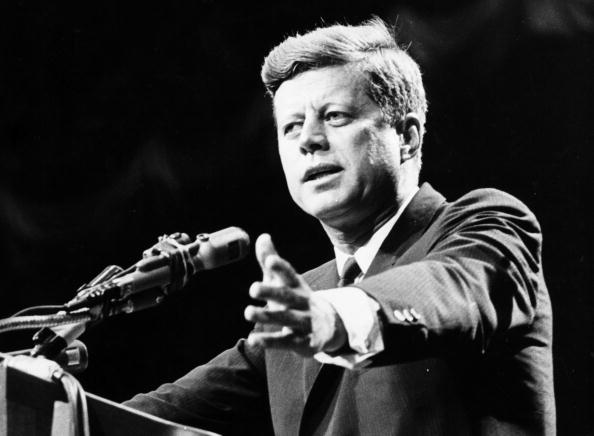 Near the end of 1959, he had advised his staff that he would be running for president in the next year's election. Although Kennedy's youth and lack of experience concerned some voters, his charisma and charm won the majority of voters over. To dampen fears about his Catholicism, Kennedy maintained a strong position of separation between church and state. As his vice president, he chose Lyndon B. Johnson. He campaigned with his family and his wife, and as many historians have noted, the fact that the presidential debates were televised was a big factor in Kennedy winning the presidency. Those who listened to the debate on the radio felt that Nixon had won, but those watching on television thought Kennedy performed better. Nixon had an injured leg, was not cleanly shaven, and sweated profusely during the debate. The popular vote in the election was incredibly close, but Kennedy won with 303 electoral votes against Nixon's 219. At his inauguration, he gave his speech that included the oft-repeated quote "Ask not what your country can do for you. Ask what you can do for your country." During his time as president, Kennedy tried to manage foreign relations with the Soviet Union, and he was somewhat successful in securing US primacy in West Berlin during his conversations with Khrushchev. One mark on his presidential legacy was the Bay of Pigs Invasion of Cuba, which was highly unsuccessful. Cuba killed and captured most of the US troops and Kennedy was forced to negotiate for their release and pay $53 million to Castro for their return.

Personal Life and Death: Kennedy married Jacqueline "Jackie" Bouvier in 1953, later known as Jacqueline Kennedy Onassis. JFK and Jackie had two children together. Their son John F. Kennedy Jr. died in a small airplane crash in 1999. Their daughter Caroline Kennedy had a career in politics as the US Ambassador to Japan. Kennedy Sr. remains notorious for the numerous affairs he had during his marriage.

On November 22nd of 1963, Kennedy was assassinated in Dallas by Lee Harvey Oswald. Numerous conspiracy theories regarding his assassination emerged throughout the years, but there has been no indication that there were any others involved in the assassination than Oswald. 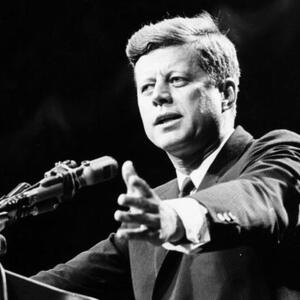