Jacques Chirac Net Worth: Jacques Chirac was a French politician who had a net worth of $10 million dollars at the time of his death. Born in Paris, France on November 29, 1932, Chirac was best known for his position as 22nd President of France. He remained in office from May 17, 1995 until May 16, 2007 and was succeeded by Nicolas Sarkozy.

During his presidency, Chirac was Co-Prince of Andorra from May 17, 1995 to May 16, 2007. Prior to that he was Prime Minister of France from March 20, 1986 to May 10, 1988. He also assumed the positions of Mayor of Paris, Minister of the Interior, Minister of Agriculture, Minister for Relations with the Parliament, and President of the Correze General Council. He was a member of the Communist political party before 1962, followed by UNR between 1962 and 1968, UDR between 1968 and 1971, RPR between 1971 and 2002, and he is currently involved in the UMP political party. He is married to Bernadette de Courcel and has been since 1956. They have two daughters together by the names of Laurence and Claude. Chirac attended the Institute of Political Studies, Paris as well as the National School of Administration and practiced Roman Catholicism. Many of Chirac's policies during his presidency regarded the lowering of tax rates, removing price controls, business privatization, and heightened punishment for crime and terror. Chirac was accused of embezzlement in 2009 and in 2011 was found guilty of nineteen fake jobs paid by the city of Paris, causing for conviction of illegal conflict of interest, abuse of public trust and misuse of public funds. He served two terms as President of France, which is recognized as the second longest reign in the country's history. An assassination attempt was made on him in 2002 during Bastille Day by Maxime Brunerie who was associated with Unite Radicale. Chirac was a member of the Constitutional Council of France and established the Fondation Chirac, which focuses on peace advocacy programs. 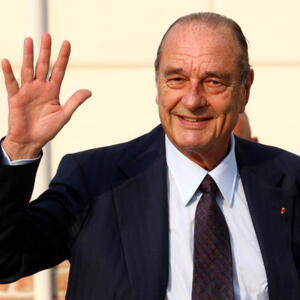