Idi Amin net worth: Idi Amin was a Ugandan military officer who had a peak net worth of at least $100 million, though it's impossible to perfectly peg the amount of wealth he plundered during his decade reign of terror. He was best known for being President of Uganda and one of the cruelest leaders in world history.

Idi Amin was born in Koboko, Uganda Protectorate in 1925 and passed away in August 2003. He served as the 3rd President of Uganda from January 1971 to April 1979. Amin had at least six spouses and an estimated 43 children. He served for the United Kingdom until 1962 and Uganda from 1962 as a lieutenant and field marshal in the King's African Rifles unit. He participated in the Mau Mau Uprising, the 1971 Ugandan coup d'état, and the Uganda-Tanzania War. Idi Amin was known as the "Butcher of Uganda". He declared himself President and was the chairman of the Organisation of African Unity. He persecuted certain ethnic groups and political dissidents. After Tanzanian troops invaded Uganda, Amin was ousted from power and went into exile in Libya and Saudi Arabia. It's estimated between 100 thousand and 500 thousand people were killed under his regime. Idi Amin passed away on August 16, 2003 at 78 years old. 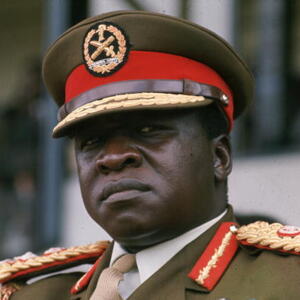