Hosni Mubarak was President of Egypt from 1981 until 2011. He also served in the Egyptian Air Force, as career officer and commander (1972-1975,) and eventually became the air chief Marshall. Mubarak was forced to resign as President in 2011 amid heavy protests and demonstrations. He and his two sons were also held and questioned concerning charges of political corruption. Mubarak was accused of pre-meditating the murder of innocent protesters during the time of the revolution, as well as being suspected of having something to do with the assassination of former President Anwar Sadat. President Sadat had appointed Mubarak to be his Vice President in 1975, and Mubarak met with many important political figures and took part in all meetings, in support of Sadat's policies. He was considered Sadat's right hand man, and no one wanted to cross him. Mubarak took over as President after Sadat was killed by a military Jihad cell. During Sadat's Presidency, Egypt was suspended from being a part of the Arab League, because of his peace treaty with Israel, but suspension was lifted after Mubarak took over the office.

There were several assassination attempts on Mubarak during his time in the Presidential seat. The Jihad cell tried to eliminate him, while he attended a conference, at the Organization of African Unity. It was also said that he was attacked with a knife and suffered injuries. Mubarak was elected to four terms as President, although, there is a question as to whether the elections were legitimate or not. Under President Mubarak's rule, people and politicians were jailed and held without trial, people were persecuted and privacy was invaded. The government was allowed to arrest and hold people without any reason, for as long as they deemed necessary. Demonstrations, any political organizations were banned. This was called the Emergency Law.

Mubarak was facing the death penalty for the murder of peaceful protesters if found guilty. On August, 3, 2011, Mubarak and his sons, Alaa and Gamal were brought before the courts in North Cairo, and charged with corruption and premeditated murder. Mubarak pleaded not guilty. His two sons are being held in Tora Prison to await their trial.

Hosni Mubarak was born in Kafr-El-Meselha, Monufia, Governorate, Egypt, in 1928. After graduating high school, Mubarak earned his bachelors degree (in military sciences) at the Egyptian Military Academy. Afterwards he became a military pilot for the Air Force Academy where he earned his B.A. in Aviation Sciences. He was married to Suzanne Mubarak and has two sons, Alaa and Gamal.

Wealth Details: In February 2011, an ABC News investigative report found that Hosni Mubarak's personal net worth was $40 to $70 billion. According to a similar report by The Guardian, his fortune was AT LEAST $70 billion and was earned through a decades long career of bribes and corruption. The money was allegedly stored in dozens of bank accounts in Switzerland and the United Kingdom or was invested in property. 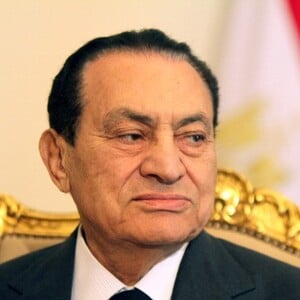