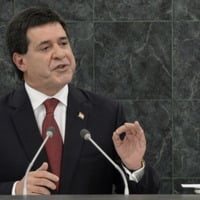 Horacio Cartes Net Worth: Horacio Cartes is a Paraguayan businessman and politician who has a net worth of $500 million. Horacio Manuel Cartes Jara (best known as Horacio Cartes) was born July 5, 1956 in Asunción, Paraguay. He is Paraguay's current president. Cartes owns dozens of businesses, held under his Grupo Cartes conglomerate, including businesses in the tobacco, soft drink, meat production and banking industries. He was also president of Club Libertad football club from 2001 until 2012 and was the president of the national team department of the Paraguayan Football Association during the 2010 FIFA World Cup qualification. After attending prestigious private schools in Asunción, Cartes studied in the United States at the Spartan School of Aeronautics (now Spartan College of Aeronautics and Technology). He returned to Paraguay at age 19 and began a long career as an entrepreneur that would eventually make him one of the wealthiest men in Paraguay. Among his early business ventures was a currency exchange company that also made him the target of an investigation in the mid-1980s by the dictatorial regime of Alfredo Stroessner. Having spent some four years as a fugitive (assumed abroad), Cartes finally returned to Asunción in 1989 and was briefly incarcerated but freed when charges of currency fraud were dropped. His principal opponent in the presidential election was Efraín Alegre (Liberal Party). The incumbent president, Federico Franco, a Liberal politician who was barred from seeking another term, had assumed office in 2012 after leftist President Fernando Lugo was impeached in response to his alleged mishandling of a deadly conflict between peasants and police. Horacio Cartes was elected President of Paraguay in 2013. He is a member of the Colorado Party.