Helmut Kohl Net Worth: Helmut Kohl is a German politician who has a net worth of $1.5 million. Helmut Kohl was born in Ludwigshafen, Germany in April 1930. Helmut is associated with the Christian Democratic Union political party. He received a doctorate degree from Heidelberg University and started his political career in 1960 when he served as leader of the CDU party.

From 1969 to 1976 Kohl served as Minister-President of Rhineland-Palatinate. Kohl served as Chancellor of Germany from 1982 to 1998 which included Chancellor of West Germany from 1982 to 1990 and reunited Germany from 1990 to 1998. As Chancellor he oversaw the end of the Cold War and his 16 year term was the longest since Otto von Bismarck. Kohl is perceived as being responsible for the German reunification. Kohl and French president Froncois Mitterrand are considered to be responsible for the establishment of the European Union. The pair received the Charlemagne Prize in 1988. Kohl also won the Prince of Asturias Award in International Cooperation in 1996 and was named Honorary Citizen of Europe in 1998. He has been described by United States Presidents Bill Clinton and George H.W. Bush as "the greatest European leader of the second half of the 20th century". Helmut married Maike Richter in 2008 and was previously married to Hannelore Renner. He has two sons. 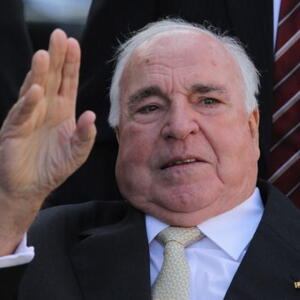