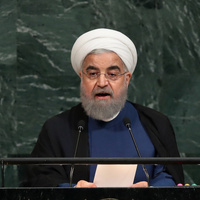 Hassan Rouhani Net Worth: Hassan Rouhani is an Iranian political who has a net worth of $500 thousand dollars. Hassan Rouhani was born Hassan Fereydoun in Sorkheh, Semnan Province, Iran in November 1948. Rouhani is the 7th President of Iran and has served since 2013. He graduated from the University of Tehram and earned a law degree and a Ph.D. from Glasgow Caledonian University in Scotland. Rouhani served in the Iranian military and was Commander-in-Chief of Air Defense Force from 1986 to 1991 and was Deputy to Second-in-Command of Iran's Joint Chiefs of Staff from 1988 to 1989. He is a member of the Moderation and Development Party since 1999 and was formerly a member of the Islamic Republican Party and the Combatant Clergy Association. He served as Head of Islamic Consultative Assembly's Commission on Defense from 1980 to 1988. From 1980 to 2000 he was a member of the Islamic Consultative Assembly. From 1992 to 2000 he was Head of Islamic Consultative Assembly's Commission on Foreign Policy and National Security and Deputy Speaker of the Islamic Consultative Assembly. From 1989 to 2005 he served as Secretary of Supreme National Security Council and he became a member of the Assembly of Experts in 2000. From 1992 to 2013 he served as President of Expediency Discernment Council's Center for Strategic Research. In August 2013 Rouhani became the 7th President of Iran and the Secretary General of the Non-Aligned Movement. Hassan Rouhani was named by TIME magazine as the 9th Most Influential person in the world in 2013. He has improved women's rights and has encouraged personal freedom and free access to information. He married his cousin Sahebeh Arabi and has four children.