How much is Goodluck Jonathan Worth?

Goodluck Jonathan Net Worth: Goodluck Jonathan is a Nigerian politician who has a net worth of $10 million. Goodluck Jonathan was born in Ogbia, Nigeria in November 1957. He has been the President of Nigeria since 2010. He graduated the University of Port Harcourt and holds a B.S., Master of Science, and PhD. He worked as a lecturer, education inspector, and environmental-protection officer before entering politics. Jonathan is a member of the People's Democratic Party. He held the office of Governor of Bayelsa from 2005 to 2007. From 2007 to 2010 he served as the Vice-President of Nigeria under Umaru Yar-Adua. When Yar-Adua passed away on May 5, 2010 Jonathan succeeded him to become the President of the Federal Republic of Nigeria. In June 2010 he launched a Facebook page to fulfil his promise to interact more with Nigerians. Goodluck Jonathan ran for President of Nigeria in 2011 and won with 59% of the vote. He launched a "Roadmap for Power Sector Reform", launched the Youth Enterprise with Innovation in Nigeria (YOUWIN) Initiative, and launched the Transformation Agenda. He promised $4 million in 2013 to clean up villages affected by a lead poisoning outbreak.

Goodluck Jonathan Wealth Debate: Upon being elected Vice President in May 2007, Dr. Jonathan voluntarily revealed his estimated personal wealth. At the time, Dr. Jonathan's 2007 net worth was reportedly equal to just over $8.5 million US dollars. Dr. Jonathan has since been criticized for not making more frequent public declarations of his wealth. Some reports have even claimed that Dr. Jonathan's personal net worth could be as high as $250 million. In October 2014, a Presidential spokesman disputed these higher end estimates and maintained that he "regularly declares his assets as required by Nigerian laws". The President's office also threatened to sue any website that mentioned these alleged higher end net worth estimates. 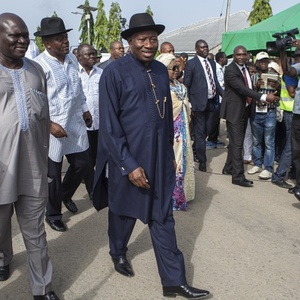